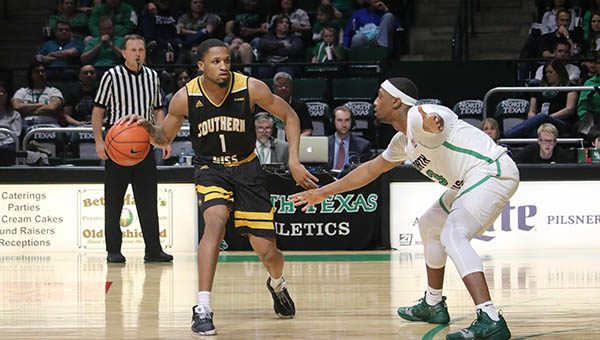 Ole Miss now has won four straight in Memorial Gym and seven of the last nine between these teams. First-year coach Kermit Davis picked up where he left off by winning his fourth consecutive in a streak he started at Middle Tennessee.

The Rebels came in as the SEC’s second-best shooting team, hitting 50.7 percent from the floor. They started a little cold in the first half, hitting just 41.9 percent (13-of-31). They nearly made up for that in the second half, and they also had a 36-35 rebounding edge.

Then the Rebels took over with a 20-7 run. Davis hit a 3 and then stole the ball to set up Shuler for a fast-break layup and a 65-60 lead that matched their largest of the game to that point. Tyree added a pair of free throws for the Rebels’ biggest lead to finish the run.

Vanderbilt didn’t hit a bucket after Aaron Nesmith’s 3 with 3:46 left. The Commodores finished the game hitting only one of their final seven shots.

The Mean Green (15-1, 3-0 Conference USA), whose only loss came at Oklahoma, have won seven in a row and are off to the best start in program history.

Cortez Edwards scored five points during an 11-2 run, including a jumper that capped the spurt with 3:22 left and gave the Golden Eagles a 62-61 lead — their first since 23-21. Neither team scored again— as they combined to go 0 for 4 from the field with four turnovers — until Miller made a layup to give UNT a one-point lead with 15 seconds left.

Tyree Griffin missed a layup on the other end and Umoja Gibson hit two free throws to cap the scoring with 2.6 seconds to go. Leonard Harper-Baker missed a potential tying runner from half court as time expired.

The Golden Eagles were 7-for-15 at the free throw line.

Edwards scored 24 points and Griffin had a career-high seven steals for Southern Miss (8-7, 0-3), which has lost three in a row and five of its last six.
Southern Miss will return home after a six-game road trip to play Middle Tennessee on Thursday night.

“The way we played today, if we do that the next 15 ballgames, we are gonna be happy a lot,” Southern Miss coach Doc Sadler said. “You’re never happy when you lose, but North Texas is playing as well as anyone in our league, and we had a chance to win it. We’re struggling at the free throw line, and can’t give those points up and expect to win a one or two point ballgame.”

Texas Southern fell behind 6-0 early, but Devocio Butler sank a 3-pointer to give the Tigers an 11-9 lead with 16:34 left in the first half and they never trailed again.

Butler finished with 15 points — all in the first half — and five rebounds for Texas Southern (6-8). Jeremy Combs pitched in with 14 points, six rebounds and four assists and Jalyn Patterson scored 12 with nine assists. Trayvon Reed came off the bench to score 13 and grab 12 rebounds for his second straight double-double and fifth of the season. Butler was 4 of 4 from beyond the 3-point line to guide the Tigers to a 43-32 lead at halftime.

DeShaw Andrews’ layup to open the second half pulled Alcorn State within nine points, but Patterson and Jones hit 3-pointers to cap a 10-0 run and the Tigers cruised from there.

McKnight was 4-of-5 from 3-point range and had six rebounds and five assists for the Golden Lions (4-10). Charles Jackson added 11 points and Terrance Banyard had 10.

The Lions took the lead for good at 36-34 on McKnight’s layup early in the second half. The Delta Devils (2-13) got the deficit back to one before the midpoint of the period, but they never reclaimed the lead and UAPB led by double digits for the final 3:43.

UAPB trailed for most of the first half but closed the period on a 12-5 run to take a 33-30 lead into the break.

Gregory Jones-Rollins and Aleksa Koracin had 12 points each to lead Mississippi Valley State.

Jackson State (4-11, 1-0 SWAC) now has won seven of the last nine games with the Bulldogs.

Howell, a graduate transfer from South Dakota State, entered the game averaging 11.5 points and 8.5 rebounds. Venjie Wallis, a transfer from the University of New Orleans, finished the game with 11 points and knocked down a pair of critical free throws in the overtime period.

The Statesmen (8-4, 4-1 Gulf South Conference) won for the sixth time in seven games.

Delta State led 29-27 at halftime, opened the second half with an 11-2 run and never led by less than five points after that.

West Georgia shot 53.3 percent (16-for-30) and outscored Mississippi College 44-26 in the second half. Marquill Smith led the Wolves with 20 points and 11 rebounds.

With a big week ahead, the Vicksburg Gators were trying to get a bit of a bounce from Friday’s home... read more