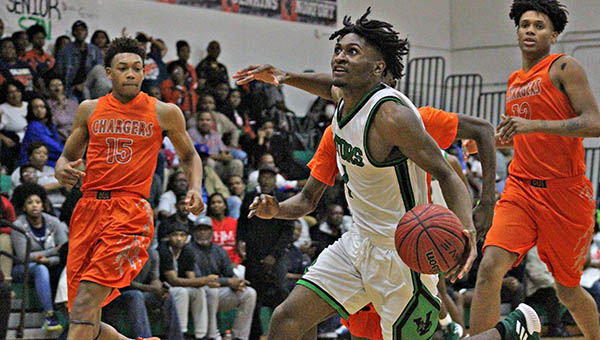 Vicksburg’s Gregory Jenkins drives into the lane for a dunk and two of his 13 points in the Gators’ 75-70 win over Callaway on Tuesday. (Ernest Bowker/The Vicksburg Post)

For 10 years Callaway tormented Vicksburg High, while the Gators were little more than the next opponent on the path to another championship.

Callaway beat Vicksburg — soundly, more often than not — in the regular season and the postseason, in games that didn’t matter a whole lot and in games at the highest level.
On Tuesday night the Gators finally got, if not revenge, then at least some satisfaction and a shot of confidence against their longtime nemesis.

Ty’Ron Moore led four Vicksburg players in double figures with 18 points, and the Gators hit a dozen 3-pointers as they beat Callaway 75-70 in their Region 4-5A opener. It was Vicksburg’s first win over the Chargers since Feb. 20, 2009. The 12-game losing streak since then included the 2014 Class 5A championship game and nine consecutive double-digit losses, and Callaway won five state championships during it.

“We hadn’t beaten them in 10 years, so that’s history. A lot of people here in Vicksburg have been doubting us and we just fed off of that. We’ve been listening to people all week saying how we’re going to lose by 30 and this and that,” said senior guard Devan Kiner, who scored 14 points. “For us to come out here and get this win, that’s a big win. It’s exciting to see what we can do. We’ve had some tough losses. This is a confidence booster. I feel like we can get rolling now.”

For the 2018-19 Gators (9-6, 1-0 Region 4-5A), the victory was also a shot in the arm. It had lost two in a row coming in, and the meeting with Callaway (11-7, 0-1) marked the start of a stretch in which six of their next eight games are within the region.
Vicksburg hosts Ridgeland on Friday night, and then plays Callaway again in Jackson on Jan. 18.

“That is huge, and the reason is that this is the real season. You’ve got to win your district games,” Vicksburg coach Kelvin Carter said. “One thing I know is that they can’t beat us two times because we’ve beaten them once. This game here was big, and it was a confidence booster for our guys. We watched film religiously since Saturday morning.”

Sophomore guard Daeshun Ruffin scored 33 points for Callaway, nearly half of them on free throws as he went 15-for-18 from the line. The Chargers were 30-for-40 at the foul line as a team. Vicksburg countered with a barrage of 3-pointers to close the gap or surge back into the lead every time Callaway made a run.

Moore and Devan Kiner hit four 3-pointers each, and Jermiyah Brown made three. Moore drained a pair in the first part of the fourth quarter as the Gators went on a 15-3 run to take the lead for good at 65-54 with 3:30 remaining.

“We were trying to take the ball out of (Ruffin’s) hands and make some of the other guys beat us. They set a lot of high ball screens and we tried to jump it and get the ball out of his hands. It helped us,” Carter said.

The game nearly turned a minute later. Jenkins threw down a dunk on the offensive end, then got back on defense and blocked a shot by Ruffin to bring the crowd to its feet. Jenkins was called for a foul on the play, however, and then had it compounded by also getting a technical foul for excessive celebration.

Ruffin made all four free throws to cut a 10-point deficit to 67-61 with 2:31 to go and spark a Callaway run. It got as close as 71-68 with a minute left, but the Gators stayed a step ahead at the free throw line. Callaway also missed two 3-pointers and Ruffin — an 82 percent free throw shooter — clanked a pair of free throws with 21.1 seconds to go.

Jenkins and Kiner each split a pair of free throws in the last 20 seconds to restore the lead to seven points, and Cuwandric Samuel hit a harmless uncontested layup at the buzzer for the final margin.

Samuel finished with 15 points and 10 rebounds for Callaway and Keivion Hunt added 12 points.

“Defensively is what fueled us,” Carter said. “We had a great first half. They get out on teams so fast, but we had a great first half. We handled the 1-2-2 (zone defense), we scored in transition and we got back on defense. Ruffin is a hell of a player. You can’t stop him. All we wanted to do was slow him down, and I think we did a good job of slowing him down.”

WC 53, Clinton 48
Jabari Bowman scored six of Warren Central’s 11 points in the fourth quarter and finished with 15 to lead the Vikings to a big region win over Clinton.

Warren Central (9-9, 2-0 Region 4-6A) won for the fifth time in six games overall, and stayed in first place in Region 4-6A. It’ll finish the first half of its region round robin next Tuesday at home against Provine.

Hillcrest 66, St. Al 44
Harrison Cass scored 15 of his 26 points in the second half as Hillcrest Christian ran away from St. Aloysius (7-4, 1-2 District 3-AAA) and handed the Flashes their third loss in a row.

The game was tied at 31 at halftime, and then Hillcrest held St. Al to just 13 points in the last two quarters. Cass hit a pair of 3-pointers and scored 10 points in the third quarter as Hillcrest outscored St. Al 18-6 to take a commanding lead.