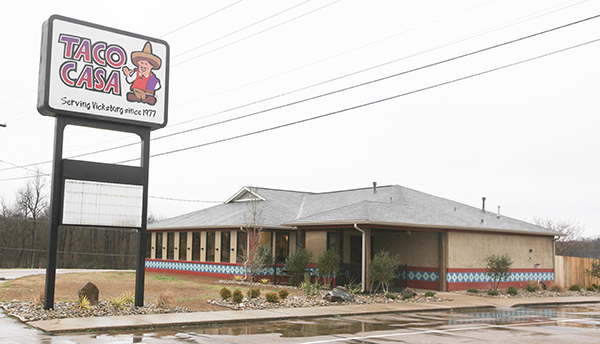 The newest location of Taco Casa is now open on Highway 27. A grand opening and ribbon cutting will be held Tuesday at 10 a.m. (Courtland Wells/The Vicksburg Post)

A favorite Vicksburg restaurant has a new location in a familiar site.

Taco Casa, a Vicksburg landmark since 1977, recently opened another location in the former Rowdy’s restaurant on Highway 27 with a new look and style, but same great food with some new options.

“We are looking to reinvent ourselves a little bit at this new location,” Angela Ladner, Taco Casa social media and marketing director, said. “There are a lot of new things customers will notice when they come to the new location. We’re hoping if it is well-received from the community like we think it will be, we think it will become a standard for Taco Casa.”

One of the new food options is sliced grilled chicken for those who are more health-consicous.

“I wanted to offer something a little more lean than beef,” Nosser said.

Ladner said the new Taco Casa is the vision of owner Reagan Nosser, who took over the family-owned business when his father Rowdy Nosser passed away suddenly in 2017.

“This whole concept, the renovations and all of it are Reagan’s,” Ladner said. “This is his first delve into the restaurant business and he has reinvested in the community. This is truly his vision. He said ‘this is the way I want it to be’ and that’s the way it is. We’re thrilled with is vision and think it will work really well at that location.”

Closing the iconic and very popular Rowdy’s was not an easy task and not taken lightly. But Ladner said Rowdy always had in the back of his mind to change the restaurant.

“After 30 years, he was thinking of changing it to Taco Casa,” Ladner said. “Without Rowdy it’s very difficult to have Rowdy’s. It’s just not the same.”

“The idea was to make it not look like Rowdy’s and more like Taco Casa,” Nosser said. “It’s completely different.”

The new location has been open for a couple of weeks, working out the kinks with new employees and training.

“We wanted to try and take it slow at first,” Nosser said. “We’ve been working to get everybody acclimated with how to make the product and adapt before we got the big rush.”

A ribbon cutting and grand opening ceremony for the newest Taco Casa will be held Tuesday at 10 a.m.

‘The Lion King’ comes to life in VHS production

Puppetry, acting and an iconic musical score will converge this weekend during the Vicksburg High School’s upcoming production of “The... read more