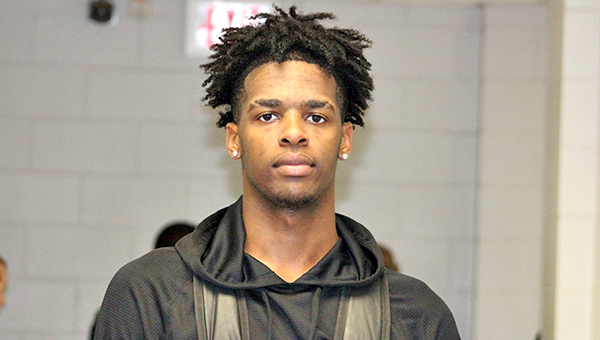 Vicksburg High’s Devan Kiner scored 10 of his game-high 19 points in the fourth quarter to lead the Gators to a 56-48 victory over Ridgeland on Friday.

Vicksburg’s Devan Kiner did just that.

Kiner scored 10 of the Gators’ final 12 points to help lead them to a 56-48 win over Ridgeland in a Region 4-5A matchup on Friday.

“It was a hard-fought game and both teams played their hearts out,” Vicksburg coach Kelvin Carter said. “We went up 10 and all of a sudden we were up one. Ridgeland is going to play hard and run their sets and are a resilient team.”

Ridgeland started the fourth quarter on a quick 8-3 run to take a 44-43 lead, but Kiner hit a 3-pointer and Gregory Jenkins a layup to put the Gators up 49-45 midway through. They never trailed again.

In the final minute of the fourth quarter Ridgeland had a shot blocked while going into the basket. Head coach Roderick Davidson got called for a technical foul for pleading his case that the ball was blocked while in the cylinder. Kiner then hit seven of the last eight free throws down the stretch to seal the win for Vicksburg.

“At the end I thought we got away with one on the goaltending call,” Carter said. “I hate to see the game end that way because Davidson is a great guy and great coach.”

Kiner finished with a game-high 19 points to lead Vicksburg, while Keshawn Brown added 11 points for the Gators. Kiner has scored in double figures in 20 of Vicksburg’s 23 games this season.

“I hit my first two 3-pointers and after that I couldn’t get going, but got to credit my team for stepping up,” Kiner said. “At the end I live for moments like that. Had to hit those free throws, those were huge.”

The Gators, who have won four consecutive games, don’t play again until next Friday when they travel to Germantown to finish region play.

“We gave them too many opportunities and dug ourselves a hole early,” Davidson said. “I don’t like to talk about officials but they were off their game tonight. I’m proud of my guys for playing hard and we get to see Vicksburg again in district tournament.”

(G) Ridgeland 63, Vicksburg 54
The Vicksburg Missy Gators lost to flu bug before they lost to Ridgeland.

Behind the strong play of Morgan McCray and Miesha Brown, Ridgeland was able to hold off the Missy Gators and record its first region win. McCray had a game-high 20 points to lead Ridgeland, while Brown added 18.

Vicksburg (16-8, 3-2 Region 4-5A) was missing three starters because of the flu, coach Troy Stewart said, which contributed heavily to its second straight loss.

“We didn’t play well period,” Stewart said. “Bottom line is we’ve got three girls out with the flu, two others hurt and not having the depth hurts and it did tonight.”

Even with the loss, Vicksburg is still locked in as the No. 2 seed for the Region 4-5A tournament. Germantown is the No. 1 seed, Callaway the 3 and Ridgeland the 4. Vicksburg would play Callaway in the first round.

After trailing 41-31 at the end of the third quarter, the Missy Gators opened the fourth on a 10-4 run to cut the deficit to 45-41, but from that point on the Lady Titans had an answer.

“We are just depleted right now simply because we are sick,” Stewart said. “I don’t know what is going around Vicksburg High, but we’ve had 40-60 people out every day this week.”

Sanders has scored at least 20 points in each of the last 11 games. Warren Central is only 5-6 in that span, but has beaten Provine twice to assure itself of either the No. 2 or 3 seed in the region tournament.

(B) Provine 48, Warren Central 43
Provine escaped with a five-point victory over Warren Central in the latest close game between the Region 4-6A rivals. Three meetings this season, including the JPS Tournament championship game, have been decided by a total of nine points.

Warren Central is tied with Clinton (16-8, 3-1) for first place in Region 4-6A. Those teams will play Monday at 6:30 p.m. at Clinton. The game was moved up a day because of the threat of winter weather early this week.

Warren Central beat Clinton 52-48 when the teams played in Vicksburg on Jan. 8.