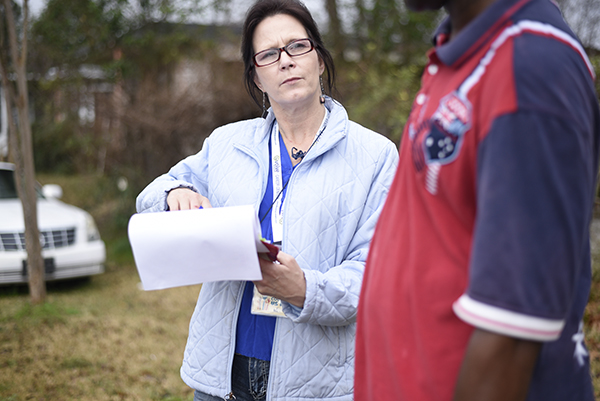 Katie Goodwin with Mountain of Faith Ministries records the information of a homeless man during the annual count of the homeless in Vicksburg in 2017. The count takes place again tonight with all of the data collected going to the U.S. Department of Housing and Urban Development. (File/Courtland Wells/Vicksburg Post)

Mountain of Faith Ministries spearheading homeless count in the area

Volunteers for Mountain of Faith Ministries will be on the streets Tuesday night to determine the size of the homeless population in Warren County.

The annual Point-in-Time Count is a count of sheltered and unsheltered homeless people on a single night in January.

It is required by the U.S. Department of Housing and Urban Development to get a snapshot, or view, of the number of homeless people in each community. Mountain of Faith Ministries is directing the effort to count the homeless in the Warren County area.

The results of the count and can have an effect on funding for homeless assistance programs.

“We’re going to go to the homeless shelters that are here in Warren County, and then we’re going to check in the Redwood area and the surrounding area — the bridges, different areas where we know people are homeless and they spend the night,” Mountain of Faith executive director Betty James said.

This will be James’ first count as director.

“I’m going to go out there and do the best that I can,” she said. “I’m going to check the area and get a head count of who’s out there.”

James said volunteers are needed to help with the count.

Anyone interested in volunteering, she said can call Mountain of Faith at 601-501-4508.

The ground was soggy, but the weather was warm and some of the chili even hotter as Warren County residents... read more