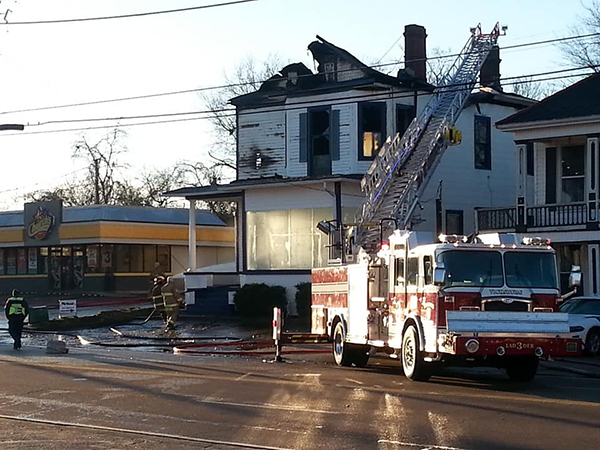 Vicksburg Fire Department crews wrap up battling a structure fire Monday morning at 1312 Clay Street. The fire is one of two the VFD is currently investigating as possible arson. (Rob Sigler/The Vicksburg Post)

Pair of Vicksburg fires under investigation

It was a busy weekend for the Vicksburg Fire Department, which responded to three fires including two that are currently under investigation as possible arson.

Vicksburg Fire Chief Craig Danczyk said around 2:45 a.m. Monday morning, notification came in of a fire with flames showing at 1312 Clay Street. Upon arrival, flames were evident and four fire trucks, the Rescue truck and a battalion chief battled the blaze before bringing it under control around 5:30 a.m.

Vicksburg Police Department closed the section of the road while the firefighters fought the blaze and post-fire investigation took place.

“The fire did spread into the attic and caused a fire in the exterior walls,” Danczyk said. “It’s an older wood structure so it had more fire spread.”

Danczyk said the fire began on the second floor of the two-story structure and VFD fire investigator Nathaniel Williams is investigating the cause.

“We haven’t narrowed it down to a specific point of origin,” Danczyk said. “We’re very early in the investigation.”

He believes the unoccupied building is a total loss. He said the property next door also had a fire in the last couple of years.

Meanwhile, Danczyk said a joint investigation with the state fire marshal could lead to an arrest following a Sunday morning fire at a church on U.S. 61 North.

He said around 6 a.m. Sunday, an alarm from a monitoring service sent out an alarm of a fire at the Church of Christ near the U.S. 61 bypass. Upon arrival, flames were showing and the fire was quickly contained to about one percent of the building.

“There was minor damage to the building,” Danczyk said. He said a suspect has been interrogated and an arrest could be made soon.

Vicksburg Fire Department crews also responded to an apartment fire at Cain Ridge over the weekend that is believed to be electrical in nature, according to Danczyk.

“It was a busy weekend. All three shifts responded to a fire. We’re watching the weather to see what Tuesday will bring,” Danczyk said. “Sometimes cold weather makes for additional work for the fire department.”

He said there were no reported injuries in any of the fires.