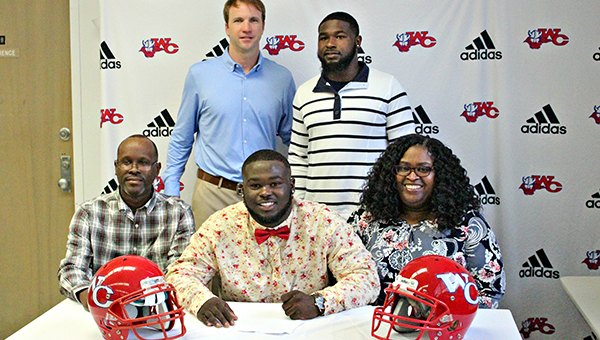 Signing day, Dr. Seuss have a lot in common

This is a one-star. This one will go far.

Some are thin and some are fat. The fat one has a yellow LSU hat (and an Ole Miss hat, and an Alabama hat …).

From there to here, from here to there, football recruits are everywhere.

With apologies to the great Dr. Seuss, it’s kind of funny how his famous “Red Fish, Blue Fish” children’s book can be perfectly adapted to talk about college football’s national signing day. Both are whimsical circuses of absurdity on a lot of levels.

While signing day is a celebration of the hard work it takes to earn a scholarship, as well as a time to dream about the future, the mechanics and nuances of it can seem a little crazy to the uninformed — or even the informed.

Among Warren Central’s 10 signees on Wednesday were a player taking a “blue shirt” and another who signed with a junior college so he could avoid a red shirt and not have to be a gray shirt.

That’s a confusing way of saying the former won’t get his scholarship until he shows up on campus in August, so the school can count it toward its 2020 total. The latter wanted to play next season instead of sitting out and enrolling next January (gray shirt) or sitting on the bench (red shirt), so he went to a two-year school and will sign again in December.

Neither signed this past December and left high school to enroll in college in January, which would have made them “green shirts.”

A few others are what are called “preferred walk-ons.” That means they have a spot on the roster but not a scholarship, although schools often try to free up academic scholarships and financial aid.

Before making these decisions each player received a handful of committable and non-committable offers. The difference between the two is like getting a goodnight kiss on a first date or a weak promise that they’ll maybe call sometime.

There is a logical basis for all of this. Each team has its primary list of recruits, but needs to have a backup plan. They also need to juggle their signing classes to fill specific roster needs in a given year.

For players, any opportunity is a good one. It’d be nice, though, if it was a little easier to figure out exactly what that opportunity is.

Three meetings this season between St. Aloysius and Riverfield Academy were decided by a total of 12 points. St. Aloysius... read more