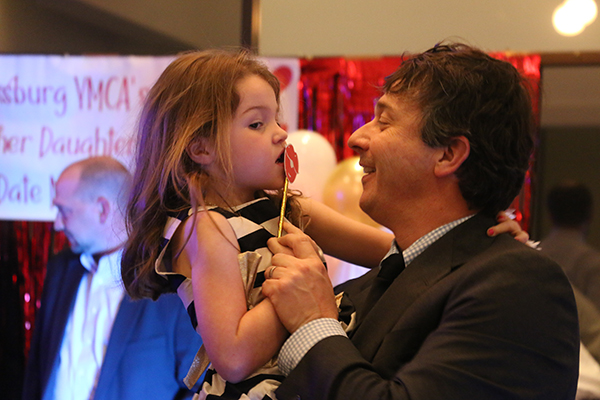 Love was in the air as fathers and daughters spent a fun-filled evening together dining and dancing.

The night also included a limo ride and a walk on the red carpet.

“That’s what I was looking forward to so I could feel like a movie star,” seven-year-old Madelyn Boyte said, referring to the red carpet walk.

On Monday, the Vicksburg YMCA held a Father/Daughter Dinner Date night with nearly 150 in attendance.

The event began at the Purks YMCA where each of the little girls received a wrist corsage.

Fathers and daughters were then whisked away in a limousine to The Anthony for a meal that included pork tenderloin, chicken fingers and a petit four cake for dessert.

Lauren Coulon, who serves as the YMCA membership director and coordinator of the event, said this was the third year the father/daughter event has been held.

“We started it because we thought it would just be a fun community event for fathers and daughters to do something together,” Coulon said.

Those in attendance agreed, especially since the event was so close to Valentine’s Day.

“I thought this would be something different than buying her (5-year-old daughter, Kensington) a toy and candy,” Robert Kapp said. “She likes to dress up, so I though it would be fun.”

Will Bradley said he thought this was a great way to spend time with his daughter.

“I don’t get a lot of one-on-one time with my daughter. Everybody is busy with all their activities,” Bradley said. “So this is just something special for us.”

“I wanted to be with my dad,” Mary Helen said, adding she had put on her own makeup for the special date.

Tyler Barnett, Boyte’s date for the evening, said he thought the evening would be one remembered long past a box of Valentine candy.

“This is something a little different and exciting to do rather than just buying candy, and it’s probably something she will remember a little longer than the candy,” Barnett said.

Jacoy Reynolds found the event an opportunity to spend time with his 7-year-old niece, Rayshawna Jones.

“I don’t get too many chances to hang with her, so I wanted to do something nice for my niece for Valentine’s Day,” Reynolds said.

While the YMCA father/daughter event is only 3 years old in Vicksburg, its history dates back several years to when YMCA executive director Phillip Doiron began the event while serving at a Y in South Carolina.

“We started this in 2002 when my daughter was 3 years old. We just wanted a way to get dads and their daughters together to have a special night,” Doiron said.

Originally the event was just a dance, but after Doiron took a job at the YMCA in Greenville, the program was expanded to include a dinner and limousine ride.

“From there on we have had the format of the limousine ride, dinner and a little dancing,” he said, which was then implemented after Doiron moved to the YMCA in Ocean Springs and now in Vicksburg.

“The event has created a lot of memories through the years,” Doiron said.

This year a DJ was hired to spin records for the dance, Coulon said, and a photo booth was also set up.

And to help keep costs to a minimum for participants, she said, The Anthony, the Ivy Place and Sheffield Rental made donations.