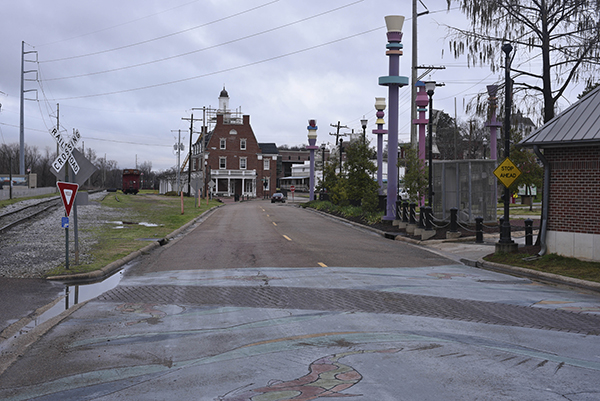 Levee Street along the Vicksburg riverfront is one area the city looks to redevelop in part through $540,000 in federal transportation funds from the Mississippi Transportation commission. (Courtland Wells/The Vicksburg Post)

The Board of Mayor and Aldermen Monday took two steps toward redeveloping the city’s riverfront.

The board approved a resolution seeking a local and private, or special bill, from the Legislature to establish a lease purchase agreement to finance with a private company the redevelopment project, and an agreement with the Mississippi Transportation commission to receive $540,000 in federal transportation funds for improvements to Levee Street.

No contractor has been selected for the redevelopment project.

The city’s riverfront redevelopment committee has proposed an estimated $10.9 million project that includes piers for riverboats, benches, an amphitheater, park, pedestrian crossings at the Kansas City Southern Railroad tracks, and an elevated walkway from Washington Street to the water.

New Orleans architects Eskew-Dumez-Ripple, are the project designers. One major change under the plan is restricting or eliminating truck traffic along Levee Street, which is presently the major route for 18-wheel trucks moving from Interstate 20 and the Port of Vicksburg on Haining Road.

The resolution for the local and private bill would allow the city to “enter into lease agreements with any corporation, partnership, limited partnership, joint venture or individual under which the county or municipality may agree to lease a facility for use by the lessor for the purpose of waterfront area park improvements and related amenities for a primary term not to exceed twenty (20) years.”

The transportation funds will go toward improving Levee Street’s sidewalks, develop parking for the depot museum in the Yazoo and Mississippi Valley Railroad Depot, and other improvements to Levee Street. The money will require a 20 percent match from the city. The project cost has not been determined.

The goal of the Levee Street project is to make the street more pedestrian-friendly for people, allowing them to walk to the Old Depot Museum, the riverfront and the Jesse Brent Lower Mississippi River Museum and Interpretive center.

In another matter, the board received qualifications from four companies to perform the engineering and design to relocate the Fairground Street Bridge to the multi-use park at Washington and Jackson streets.

Neel-Schaffer Engineers of Jackson, Southern Consultants Inc. of Jackson, the Pickering Firm of Flowood and Allen and Hoshall of Jackson were taken under advisement.

Mayor George Flaggs Jr. said Monday the relocation project has received approval from the Mississippi Department of Archives and History.

Students from St. Aloysius High School are set to perform Disney’s “Newsies” at the Parkside Playhouse Theatre. And in support... read more