Boil water notice in Vicksburg has been lifted 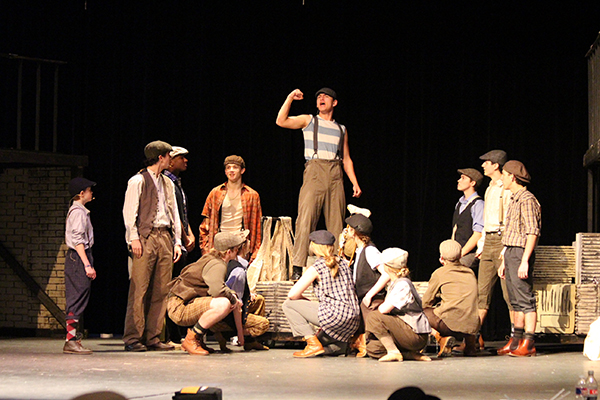 And in support of the production, cast members and teachers have been promoting the show in some very creative ways.

Because “Newsies” is based on the New York City Newsboys’ Strike of 1899, director and choreographer for the production Chesley Lambiotte said, “Teachers are incorporating the history related to the storyline of the musical into the classrooms and featured cast members have been going to class rooms at St. Francis on Fridays and are visiting with the students.”

Lambiotte said the cast members are also collecting newspapers from the elementary students for the production and a pizza party will be offered to the class who collects the most papers.

“Our cast will also be in costume helping with carpool drop-off during the week of the show. The younger students love to see the older kids dressed up and in character,” Lambiotte said.

Rehearsals for the show began last year, Lambiotte said, and more than 85 students are involved with the production.

“We began music rehearsals in December under the direction of our music director, Christie Beasley,” Lambiotte said, with rehearsals scheduled two to three hours four nights a week in the school cafeteria up until the week before the production.

“At that point, we will move into the Parkside Playhouse where we will build the set, create lighting design, and continue blocking and staging our show,” she said.

This year, Lambiotte said, the school has had the opportunity to rent professional sets as well as costumes from a company out of Texas.

However, because the set was shipped in many pieces, students and Vicksburg Theatre Guild volunteers, Bobby Newell and Dr. Paul Ballard, have assisted in assembling the set under the guidance of St. Al art teacher and set designer for the show, Jennifer Ratliff.

“Jill Pierce is serving as the costume and prop director, and she has been instrumental in coordinating all things costume and prop-related so that our students have the most authentic look possible for the time period,” Lambiotte said.

“Also, parents of both past and present students have come together to do everything from costume design to lobby decorations to sound production,” she said.

And since “Newsies” is a dance-heavy show, Lambiotte said, there are 14 trained dancers performing the more technical aspect of the choreography.

“But all cast members have had the opportunity to learn specific dances, especially the tap number, ‘King of New York,’” Lambiotte said. “So after the amount of time and training these students have had, we would say there are no non-dancers in our show anymore.”

St. Al will be using custom tracks of the prerecorded “Newsies” score, played by a full orchestra of live, professional musicians via MTI Player for the production, Lambiotte said.

Tickets are $15 and are available at both St. Al and at St. Francis.

“We strongly encourage patrons to purchase tickets early as shows are expected to sell out and availability at the door is not guaranteed,” Lambiotte said, adding proceeds from ticket sales go directly to the next year’s musical production and The Vickie Baker Hopkins Performing Arts Scholarship, which is awarded to an outstanding senior musical member.

The Vicksburg-Warren Chamber of Commerce Monday turned to area business owners for suggestions to attract and support entrepreneurs in Vicksburg... read more