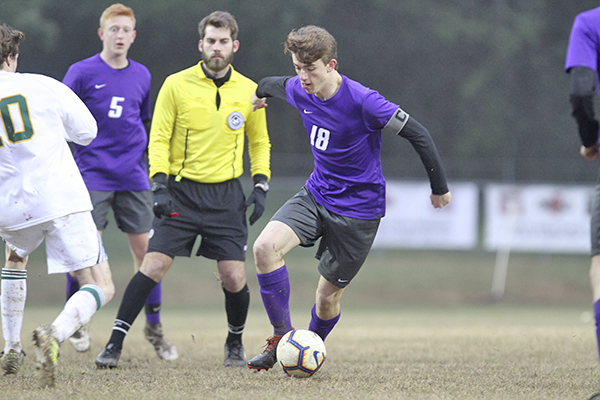 St. Aloysius' Ryan Theriot (18) dribbles against Central Hinds Academy on Thursday. Theriot scored the game-winning goal in the final seconds to give the Flashes a 2-1 victory and send them to their second consecutive MAIS Class AAA championship game. (Courtland Wells/The Vicksburg Post)

The clock had stopped ticking down and most of the crowd at Balzli Field was starting to think about overtime when the ball arced through the mist to Ryan Theriot.

With one deft move and then another, the St. Aloysius striker delivered a Muddy Miracle.

Theriot split two defenders and then beat Central Hinds keeper Ryan Talley with a quick shot across the goal — all just seconds before the final whistle sounded — to give St. Al a 2-1 victory Thursday in the MAIS Class AAA boys soccer semifinals.

St. Al advanced to its second consecutive state championship game — it won it all last season — and will face Starkville Academy or Heritage Academy Saturday at 11 a.m. at Jackson Prep.

“This is what it’s all about. It’s the last home game of my career and there isn’t a better way to go out,” Theriot said. “I just knew that was our last chance. I tried to take the best touch, first touch I could. I played it with the closest foot I had and thank God it went in.”

St. Al had outscored Central Hinds 10-0 in two regular-season meetings, but had a much harder time on a field turned into a mud pit by five days of rain. Theriot hit the post on a free kick early in the game, and his brother Kieran was stopped by Talley from point-blank range in the 23rd minute.

The game was scoreless for the first 64 minutes, and then turned into an exciting shootout at the end.

Ryan Penson broke the ice by converting a 2-on-1 breakway to give Central Hinds a 1-0 lead in the 64th minute. Lee Hanks answered for St. Al two minutes later when he knocked in the rebound of a deflected free kick by Ryan Theriot.

St. Al had outshot Central Hinds 16-2 at one point, but the Cougars had a 4-3 edge in shots over the last 20 minutes.

“We had the good end of the field,” Central Hinds coach Dave Riley said. “That was pretty much us, with smaller kids, with breakaways.”

St. Al, however, managed to pull off the miracle in the end. In the final seconds, Lee Hanks played a ball from near midfield to Ryan Theriot at the 15-yard line. Theriot got the ball between two defenders, split them, and then scored the go-ahead goal.

The referee blew the final whistle as soon as Central Hinds (8-4) kicked off again.

“We went down 1-0 and I was in shock. Kieran goes, ‘We got this,’” Ryan Theriot said, referring to his brother and teammate. “Not five minutes later we tied it up. I knew we had it then. It’s amazing.”