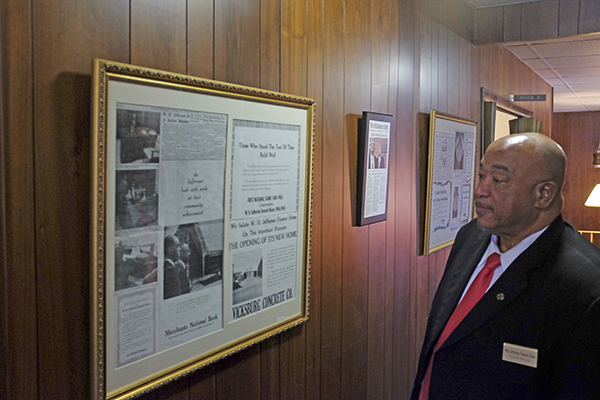 BLACK HISTORY MONTH: Jefferson Funeral Home has been in Vicksburg since 1894

W.H. Jefferson Funeral Home has been a landmark in the black community for 125 years.

“They had no children,” said James Jefferson Jr., who now manages the company.

“They ran the business until Uncle George resigned and left the business. They brought in their little brother, Robert J. Jefferson. He is the last surviving brother. He’s 97 and still getting around a lot.”

When William and Lucy Jefferson opened their business in 1894 in the 1100 block of Grove Street, Jefferson said, “It was more of a wooden frame house front type business.”

At the time the funeral home opened, and through its early years, the area around it was the center of the African American community in Vicksburg.

“Actually, from Clay Street over and go all the way over to North Locust, were business and working class,” Jefferson said. “On Randolph, you had Dr. J.D. Dillard and Dr. Edwards. Dr. Dillard was a general practitioner; Dr. Edwards was a dentist and his own dental office at his house. We had educators, florists; everybody in that area were good working class families.

Jefferson grew up in the business, spending his childhood at the funeral home.

“I’ve been here all my life. I probably saw my first body when I was 8 or 9 years old. It was a homicide. The police were down here. Mom couldn’t leave me in the house, so she brought me with her. I didn’t go in the morgue, but I saw them roll him in.

“Growing up, we played on the grounds and played basketball in the back. Death scares a lot of people, and they (his friends) couldn’t handle it. A lot of times they wouldn’t go inside.

“What we like to tell people is dead folks won’t hurt you, but they will make you hurt yourself. You find when your parents and everybody helps you dispel a lot of the rumors, and once you move those out of the way and get to what’s actually happening, what the process is, it takes the fear away.”

He said Jefferson Funeral Home has stayed in business by being fair, honest and compassionate.

“We’ve served the community through many a natural disaster,” Jefferson said. “When the tornado hit, I remember my father and uncles running ambulances back and forth all night.

Since its opening, Jefferson Funeral Home has received a lot of competition over the years, with other African American funeral homes starting in the city like Dillon-Chisley, Robbins, F.H. Willials, Lakeview and C J Williams.

Jefferson said he continues doing business the way his father and uncles have.

“They set the groundwork and the base from which I came from, and I learned watching them.

“Treat them like you would like to be treated and being honest open and fair with them. We have established that rapport (with people). My father was a humble man; he was never extravagant and helped people, and that’s what I remember the most.

“I try and keep my prices down so they are more affordable; I keep something for everyone. People have known me all my life or have known a member of my family. When you’re raised in a community, people know you.

“Even as a (justice court) judge, I see people up there in the courtroom who have used our services.”

He said operating a funeral home is a 24/7, 365 days a year business, “And some of the saddest calls are the ones you make on the holidays or right before. I’ve actually on Christmas day had to go pickup people.”

“It’s that crushing hurt you see in the family’s eyes when you pull up, and my heart goes out to them. Sometimes it brings tears to my eyes, because more than likely, I know them and have known them for a while. Whether it be ice on the ground. It’s hard for me to get a little time off because this job takes your time.”

He said he enjoys his work and enjoys helping people and being there for them.

“As sad as it is, somebody’s got to be there to do it. I’ve had friends that wanted to get into business.

“Some of them have even gone to mortuary school, but it takes a special person to be able to adapt to dealing with death on a daily basis. The things we see and deal with, all types of death, from natural causes, cancer, homicides, are wrecks, fire, you never know what you’re walking into, and you have to be prepared.”

Flood precautions underway with river on the rise