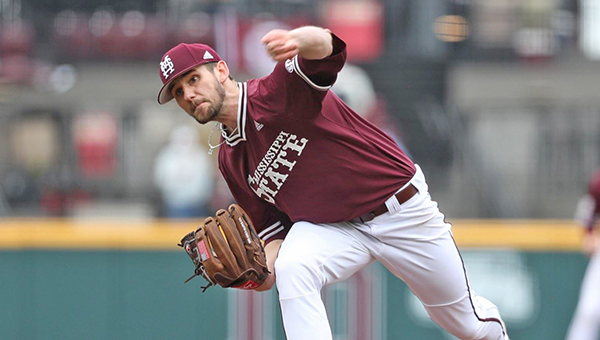 STARKVILLE — It took 10 innings, but Southern Miss finally struck first both in Friday’s game and its weekend series with Mississippi State.

Erick Hoard reached base on a two-out single, and pinch-runner Brant Blaylock scored two batters later on another base hit by Charlie Fischer as Southern Miss beat Mississippi State 1-0 in the opener of a three-game series at Dudy Noble Field.

Fischer’s hit gave the Golden Eagles (4-0) the win in an early-season pitchers’ duel.

Southern Miss starter Walker Powell pitched 7 2/3 innings, allowing five hits and no walks while striking out two. He only threw 77 pitches. Reliever Ryan Och got the win with 2 1/3 innings of scoreless relief.

Och allowed hits in the ninth and 10th innings, but pitched out of both jams without incident. He struck out Elijah MacNamee with the winning run on second base in the bottom of the ninth.

Mississippi State starter Ethan Small also wound up with a no-decision despite throwing seven shutout innings. He did not walk a batter but did hit one, allowed only one hit, and struck out a career-high 13. He took a no-hitter into the seventh inning, when Hunter Slater broke it up with a one-out single.

Not getting the win, Small said, made his outstanding outing less exciting than it could have been.

“For me it is bittersweet. I would rather win than do what I did,” Small said. “If this team has proven anything it is that it can bounce back. I feel like we beat them in every category but one and that is the runs scored. That is baseball. We have experienced it. We have been on the other side of that. Really it is just getting everybody to stay up.”

Mississippi State (4-1) finished with seven hits and lost for the first time this season. Jake Mangum and Dustin Skelton had two hits apiece. Mangum had the 81st multi-hit game of his college career, and also stole a base.

The Bulldogs have failed to score in 17 of its last 18 innings. They had runners on base in seven of the 10 innings played Friday, but none of them got past second base. Och came in with two outs in the eighth inning and got Mangum to ground out while Skelton was on second base.

The three-game series continues Sunday at the newly-renovated Dudy Noble Field. First pitch was moved up two hours, to noon, because of the threat of rain. Sunday’s series finale is scheduled for 1 p.m.

The clock had stopped ticking down and most of the crowd at Balzli Field was starting to think about overtime... read more