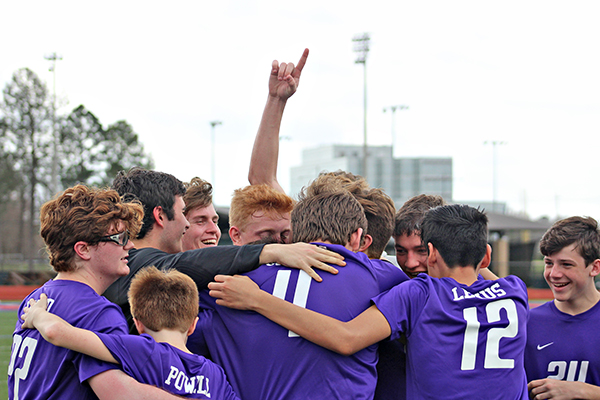 Then, catching a glimpse of a nearby photographer, they paused the celebration just long enough to mug for a picture.

After two of these things, they’ve clearly grown accustomed to the sights, sounds and routines of the big game.

Ryan Theriot scored a pair of first-half goals, and goalkeeper Haden Luke made seven saves to record his second shutout of the playoffs as St. Al beat Heritage Academy 2-0 Saturday in the Division III championship game at Jackson Prep.

“I woke up this morning saying I’m just going to enjoy this day. Whatever happens, happens,” St. Al coach Scott Mathis said. “The first five or 10 minutes of the game, and the last 10 minutes, was bad. Other than that, we controlled the game. That’s how the ball bounces in soccer. We were the better team and we prevailed.”

St. Al (17-1-1) capped off a remarkable season in which it went undefeated in its last 17 games and did not lose after falling at Division I finalist Jackson Academy in early November. It claimed its second state championship in a row and is 21-1-1 in its last 23 games going back to last season.

In three playoff games this season, the Flashes only allowed one goal.

“No team deserves it more than we do. We put in the time and had a lot of stuff going on, too. It’s been a journey, and I’m just glad it ends with back-to-back,” said Theriot, a senior striker who finished the season with 55 goals and has 104 over the past two seasons. “This is the best way to top it off. You can’t top it off better than this.”

The Flashes weren’t happy with their first-half defensive performance, and with good reason. Heritage Academy missed on three outstanding scoring chances. Luke stopped a breakaway chance in the seventh minute and a penalty kick by Jackson DiCicco in the 22nd.

In the 37th minute, Jonathan Swartz got a perfect cross from Todd Sharp that caught Luke and the defense out of position, but tapped the ball wide of an open net. Early in the second half, the Patriots had another shot hit the crossbar.

“Kieran Theriot told me to dive to my left because that was where he was kicking it. I did that and he kicked it right in my hands,” Luke said of the penalty kick. “The other ones, I was pretty lucky and the other team was unlucky because they didn’t get a good touch on the ball.”

Although the defense was a little shaky, the offense was able to cash in a couple of chances. Ryan Theriot chipped a shot over the goalkeeper from 20 yards out in the fourth minute for the icebreaking goal.

Then, in the 34th minute, Theriot fought his way through two defenders, kept possession of the ball after it was twice knocked off his foot, wheeled and sent a grounder from the 6-yard line past the keeper for a 2-0 lead.

“We had a hard time scoring a couple of days ago. We knew we had to come out fast and put it on them early to get a chance. We did that,” Theriot said. “We played a little lax in the second half, but it was a good win. The last 10 minutes, they were done. They were gassed.”

The two-goal lead was crucial, Mathis added, because of the weather. Although rain held off for the duration of the game, a steady 15 mph wind was blowing straight down the field. The Flashes had it at their backs in the first half and headed into it in the second.

Getting two goals before they had to run into and send passes against the wind allowed the Flashes to play a bit more conservatively in the second half.

“That was huge, and that was our plan from the get-go. We knew when we saw the wind blowing and from playing here a month and a half ago the thing we had to do was get the right side first and get two goals,” Mathis said. “We had two or three other opportunities we should have capitalized on and didn’t, but it worked out.”

The junior keeper made four of his seven saves in the second half, as well as several other plays that stopped scoring opportunities deep in St. Al’s end.

“It was great. It’s the best feeling in the world. I couldn’t do it without my teammates and my defense. They helped a lot,” Luke said. “They got the bodies in front of them and got the ball away from me.”

Missy Gators eliminated by Lafayette in Class 5A playoffs

By Walker Bailey The Oxford Eagle OXFORD — The Lafayette Commodores held on to advance to the third round of... read more