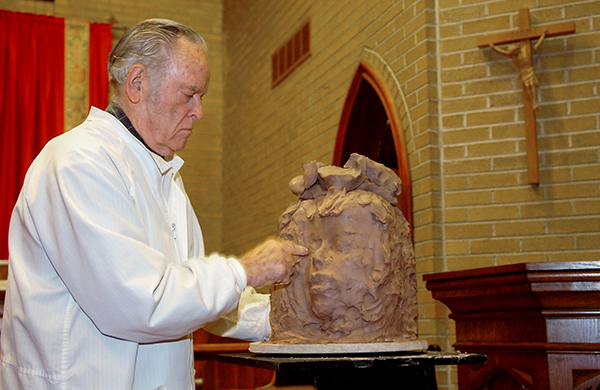 Music and a one-man play giving Judas’ side of his part in Jesus’ crucifixion are on the schedule for St. Alban’s Episcopal Church’s Lenten Arts Program beginning March 13.

“The programs began about 10 years ago, just after I came to St. Alban’s,” pastor the Rev. Billie Abraham said.

“I was wondering what we were going to do for Lent, because most churches have special programs during Lent. I decided to go into the arts, and we had the healing service, then we had a soup dinner, and then an arts performance.

“We are not having the soup dinner this year, because our church is under construction and we don’t have a kitchen. People are welcome to come for the healing service and the arts, or just the healing service; they can pick anything they want.”

Lent, Abraham said, is a time “to open ourselves up and reflect upon our relationship with God, and the arts have the ability to do that. We shift from that ‘to do’ side of our brain, to the wide-open space of creativity.

“We are the audience and the performers are there to offer us the opportunity to slip into that mindset of creativity.”

Arts, she said, “Come alive with the audience that listens. So the people who listen become part of the arts performance because they feed into the energy of the artist.

We’re looking for people to come and sit and allow the arts to do what the arts do so well.

“The arts are part of who all of us are if we give it a chance; let its power have its way with us.”

This year’s programs, Abraham said, will feature a fiddle fest, a vocalist with accompaniment, a performance by Patrick Smith and his band, and the Mississippi Boychoir.

The fiddle fest, she said, will feature blue grass music and hymns. “It will be music to stomp your feet with. It’s wide open to whatever they want, but it’s hard to sit still during their concert because it’s so active,” she said.

John Maxwell’s one-man play, “Judas Iscariot,” she said, “Is a way of looking at Judas that we don’t ordinary see; Judas’ total misunderstanding of what Christ was about.

“Drama is so powerful; it’s going to be the Wednesday before Holy Week and it really sets the tone to entering into Holy Week; to making that journey with Christ to his crucifixion.

The schedule for the Lenten Arts Program includes: