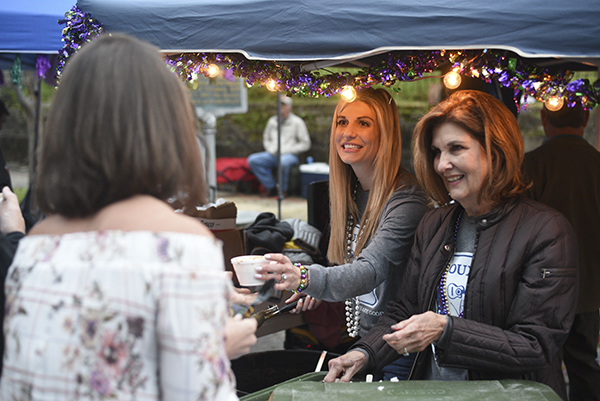 The crowd slowly gathered behind the barricades along Washington Street.

Some were bundled up against the 50-degree temperatures and the cool breeze, while others decided to brave the elements in shorts and short-sleeved shirts.

Some were decked out on the Mardi Gras colors of purple, green and gold, while some wore plainer clothing. By 4 p.m., they lined the sidewalks two- and three-deep for Vicksburg’s 18th Mardi Gras parade.

Main Street Vicksburg executive director Kim Hopkins said an estimated 7,000 to 8,000 people stood behind the barricades to catch the throws.

Some, like Sabrina Pigg of Vicksburg and granddaughters Sarah and Abigail, were first-timers and decorated for the season with face paint and Mardi Gras halos in their hair.

“We thought we’d come see what it was about,” she said.

Parade rookies Denise Fogg of Gilbert, Louisiana, and Renee Simpson of Madison, Louisiana, were in town to watch Denise’s brother — Renee’s cousin — who was riding the Golding Barge Line float.

“This is the first time Golding has had a float,” Renee said. “We’ve been to Mardi Gras parades in Louisiana, and we wanted to see how Mississippi does it.”

Others were more experienced, like David and Willie Ruth Kelly who sat on a bench on Washington Street waiting for the parade and wearing beads around their necks.

“We’ve been here before,” Kelly, a retired band director from Port Gibson said. “I was director at Port Gibson High School. In 2013, we won ‘Most Enthusiastic Group.’”

Willie Ruth Kelly said while her husband was band director at Port Gibson, the band participated in Mardi Gras parades in New Orleans and elsewhere.

“We’ve got a good collection of beads; we’re hoping to add to it,” she said.

“I’ve always found that if you are wearing some beads, they’ll throw them your way, ’cause they thought you caught them,” David Kelly said. “They usually don’t throw to people who aren’t wearing beads. They’ll pass you by.”

The parade rolled several minutes after 4 p.m. under cloudy skies that threatened rain, but the only thing falling from the sky Saturday afternoon were beads, Moon Pies, cups and other surprises.

“This has been a very good day,” Hopkins said. “I think the turnout was better than last year.”

As the floats dispersed as they completed their route, parade spectators moved to Crawford Street and the area in front of the Southern Cultural Heritage Center to become participants in the Vicksburg Foundation for Historic Preservation’s 8th annual Gumbo Cook-off.

Foundation executive director Nancy Bell said about 1,200 people attended the event to sample the work of 11 teams preparing their recipes for seafood and non-seafood gumbo like chicken and sausage.

“The turnout is tremendous; we’re very pleased, and the weather helped out,” she said.

“This is my first time to come here,” said Elke Briuer. “I’ve tried several different gumbos, one is like the gumbo I make at home, and another had a smoky flavor; I liked it.”

Several teams tried to add something extra to impress the judges and win the “people’s choice award,” either by decorating their booths or adding something extra.

The Roux Dawgs, a three-time cook-off winner, was looking to get number 4 Saturday night with a seafood gumbo.

“This is our granddaddy’s recipe,” cook Matt Coulon said. “My late brother, David, and I worked on it and got it down to where it tastes right, with the approval of our father.”

Jennifer Barnes, who tried the Roux Dawgs recipe had sampled three different recipes and proclaimed all “good,” was looking to try more. “I’m working my way down the line,” she said.

Supervisors ready to move onto next phase of jail site

The Warren County Board of Supervisors is preparing to move onto the next phase in constructing a new jail facility.... read more