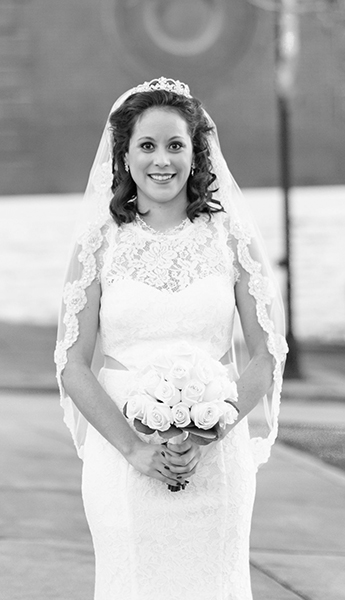 The bride is the daughter of Vivian and Gerardo I. Velazquez of Vicksburg.

She is the granddaughter of Eddie Velázquez and the late Manuela Velázquez, Nereida Marrero, and Nestor A. Cardona.

The groom is the son of Kaye and Phillip Carleton of Spring, Texas.

The Rev. Mario Solórzano and the Rev. Thomas Lalor officiated the ceremony.

The bride was given in marriage by her father, Gerardo I. Velázquez.

Music was presented by organist Karen Harrison and soloists were Marcia Weaver and Michael Becher.

A reception followed at the Vicksburg Convention Center.

For a wedding trip the couple traveled to the Bahamas.

The bride is a 2012 graduate of Vicksburg High School and 2017 graduate of Mississippi State University, where she earned a B.S. in Broadcast Meteorology and a B.A. in Spanish. She is employed as a meteorologist at WJTV-12 in Jackson.

The groom is a 2012 graduate of Bishop T.K. Gorman High School in Tyler, Texas and a 2016 graduate of Mississippi State University where he earned a B.S. in Mechanical Engineering. He is employed as a mechanical engineer with Dow Chemical Company.

On the eve of the wedding, the groom’s parents hosted a rehearsal dinner at The Anthony.

A bridal shower was held in the Parish Hall at St. Michael Catholic Church and hostesses were Marisol Gonzalez, Jennifer Laster, Dailyn Servela, and Mariely Mejias.

A bridesmaid luncheon was held on the morning of the wedding at the home of Mr. And Mrs. Frank Weaver III with Mrs. Melody Golding assisting.

Hand and Arledge to wed March 9