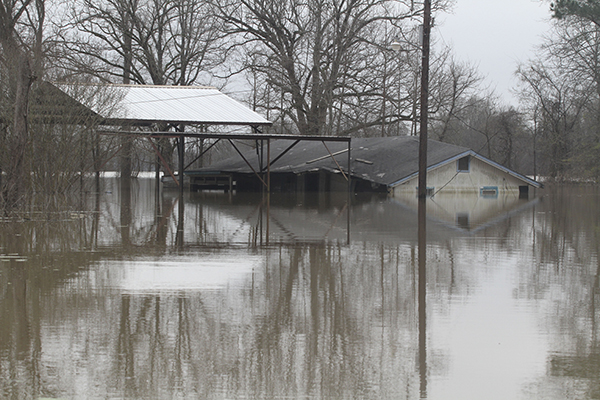 The Eagle Lake community became further isolated Monday evening after the Mississippi Department of Transportation closed Mississippi 465 between the backwater levee and the cotton gin after flood waters — projected to a level of 97 to 98 feet — covered the road.

MDOT’s decision to close that section of Mississippi 465 has resulted in the Mississippi Levee Board closing the backwater levee, forcing Eagle Lake residents to travel further north on U.S. 61 North to Mississippi 1 and then to 465, which is on top of the main line levee, to Eagle Lake.

The change also means Vicksburg Warren School District buses will have to travel further to pickup students at Eagle Lake.

“We are going to continue to serve the students there,” school district spokesperson Christi Kilroy said Tuesday.

Sheriff Martin Pace said people who do not live in the area should refrain from going to Eagle Lake or any of the flooded areas.

“If you’re not a property owner or have a residence in this area, you have no business traveling up there and adding to the stress of the wildlife that are all over the road and the danger to the public of the wildlife on the road,” he said.

“This should not be a sight seeing tour. We’re asking people who don’t live in the area or have property in the area to stay out of all the flood-affected areas.”

While emergency management officials continue monitoring traffic and other activity in flooded areas, the U.S. Army Corps of Engineers Vicksburg District are conducting daily patrols across the area as part of its flood fight efforts, according to information from the District.

Technical experts from the District office and the Greenwood and Vidalia area offices are inspecting and monitoring flood control works, such as levees, floodwalls, reservoirs and relief wells, to ensure that they continue to function as designed.

The patrols will continue as long as elevated water levels persist. The district has observed no significant sand boils or seepage at flood control sites, and the District has issued 11,000 sandbags to various locations in the region.