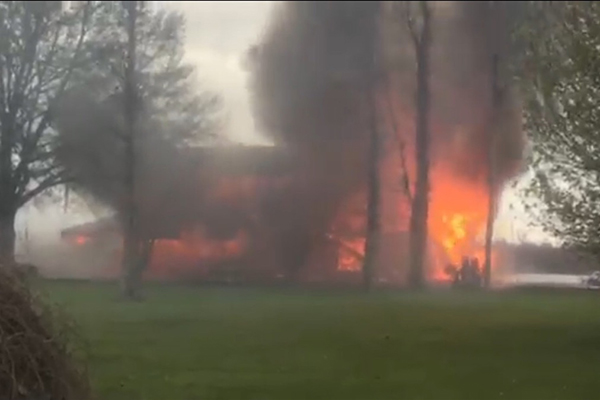 The Eagle Lake home of Amber and Justin Ashley was destroyed Tuesday by fire, claiming all of the families belongings. The community is helping the family monetarily and with donations. (Submitted/The Vicksburg Post)

This week was supposed to be a happy celebration for Amber and Justin Ashley, but their world turned upside down the day before their wedding anniversary when a fire destroyed their Eagle Lake home Tuesday.

The couple and their three children were not injured in the fire, but lost their home on Eagle Lakeshore Drive and belongings in the blaze. The official cause of the fire has not been determined, but the home was a total loss.

The family has a temporary place to stay until they recover, and they’re getting help from a community of residents who are also dealing with their own issues as floodwaters continue to rise in the Eagle Lake area.

That hasn’t stopped many from pulling together and helping their neighbors overcome the house fire.

“The community has really pulled together to show them so much love and support during this tough time I am amazed,” said Brenna Rogers, a cousin of Amber Ashley who has been helping to organize efforts to assist the family from her home in Oregon.

“It has really made being clear across the country from her in such a desperate time easier knowing that she’s surrounded by good people,” she said.

According to Rogers, the Ashleys have been together 18 or 19 years and have been married for 14 years. Their children are ages 6, 11 and 20 and they have lived in the home for nearly a decade.

“They are the most amazing people I know and would give the shirts off their back’s for anyone. I hate that this has happened, but they have received so much love and prayers from their community and family,” Rogers said.

Yore Country Store, 1511 Highway 465, is also accepting donations to help the family. Thorne’s Collision, Paper Plus and The Games have also volunteered to be drop off locations for donations.

A gofundme account created by Rogers has raised nearly $3,000 as of Thursday morning to assist the family with their immediate needs. To donate, visit the Ashley Family House Fire Recovery page.

By Kami May UWWCM Director of Marketing Vicksburg is taking a big step toward improving student success by joining the... read more