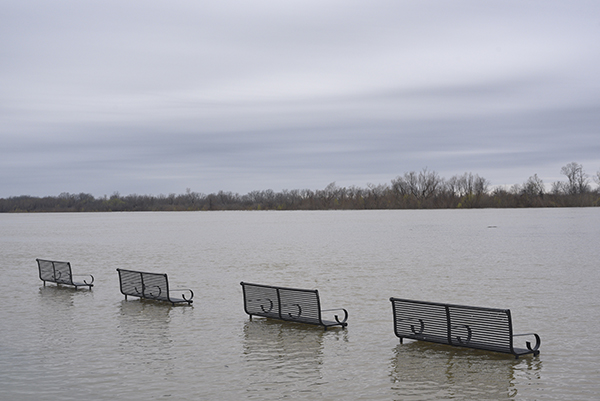 The benches at the Vicksburg Riverfront are seen just above the water level as the Mississippi River continues to rise on Thursday. (Courtland Wells/The Vicksburg Post)

County and Levee Board officials are keeping an eye on the weather and the rising water in the Yazoo backwater areas as floodwaters in that area continue to rise toward a projected level of 97-97.5 feet.

The level was 95.36 feet Thursday afternoon. The Warren County Board of Supervisors was expected to have a work session Friday to discuss the situation in the backwater area.

“At 97 feet, that’s 505,000 acres (of land) underwater in the south Delta; the largest backwater flood we’ve had since 1973,” said Peter Nimrod, chief engineer for the Mississippi Levee Commission. “It’s going to be tough.”

The high backwater is the result of heavy local rains and the closure of the Steele Bayou gate Feb. 15, when the level of the Mississippi River exceeded the level of the water on the landside. With nowhere to go, the water stayed in the area and rose.

More rain is predicted for the area this weekend.

Rising water in the backwater area forced the Mississippi Department of Transportation to close a section of Mississippi 465 between the Yazoo backwater levee and the Eagle Lake Cotton Gin, forcing the Levee Commission to close the levee, which was the only direct route to Eagle Lake from U.S. 61 North.

The levee closure forces Eagle Lake residents and property owners to take U.S. 61 to Mississippi 1 and then to 465, where they travel the top of the main line levee to get to Eagle Lake.

Wednesday, Warren County Emergency Management warned residents and property owners in Eagle Lake of the possibility that Eagle Lakeshore Road may begin overtopping and emptying water into Eagle Lake sometime in the next 8-10 days.

“When Highway 465 on the protection side of the levee gets fully overtopped, the whole area on the south of Eagle Lake starts to fill with water, because it’s basically been protected by 465, kind of like a levee,” Nimrod said.

Nimrod estimated the water level would have to exceed 96 feet to threaten the road.

“First, it’s got to overtop 465, and it’s got to fill that whole area over there, and then it’s got to build itself enough head to overtop that road,” he said. “It wouldn’t do it immediately. It would take a while.

“When it overtops 465, its going to spill and it’s going to fill up slowly, and then, once it builds that head up and gets above 96-something feet, then it could overtop Eagle Lakeshore Road.”

Nimrod said, however, he was not sure at this time whether the water would reach a level where it would overtop the road, “But there’s a definite possibility that could happen if we keep going up on the backwater, and that would cut everybody off on the south end of Eagle Lake.

“The road would be under water and it would be tough to get around.”

This week was supposed to be a happy celebration for Amber and Justin Ashley, but their world turned upside down... read more