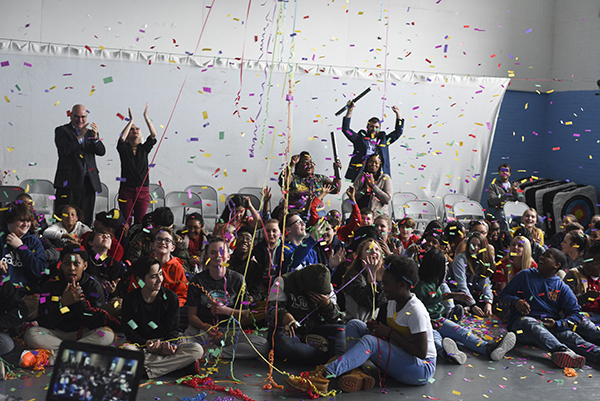 The Vicksburg Warren School District is celebrating the announcement that the Academy of Innovation has been named a Certified Lighthouse School, a highly-regarded standard set by FranklinCovey for the school’s implementation of the Leader In Me initiative. The Academy of Innovation is the first middle school in Mississippi to earn this designation and one of fewer than 20 middle schools in the world to be certified.

Leader in Me is based on Stephen Covey’s Seven Habits of Highly Effective People and is a framework that helps schools achieve results by influencing behaviors and paradigms. More than just another program, Leader in Me serves as the foundational operating system that integrates seamlessly into each school’s unique priorities, initiatives, and culture. When implemented with excellence, Leader in Me redefines what it means to be a high performing school in the 21st century. This new definition of school greatness is represented in three overlapping circles: leadership, culture, and academics.

“Leader In Me has provided a sound foundation on which to build on,” Chad Shealy, VWSD superintendent, said. “It has given our students access to important leadership skills that they can apply to any situation they encounter on their life’s path. Lighthouse Status is a big milestone and I credit the hard work by the staff, students and parents at the Academy of Innovation. They have done an amazing job.”

The certification is evidence that schools have produced outstanding results in school and student outcomes, by implementing the process with fidelity and excellence. It is also because of the extraordinary impact that the schools may be having on staff, students, parents, and the greater community.

“This process has been an amazing learning opportunity for our staff and our students,” Dr. Jason McKellar, AOI principal, said. “I am proud of the work that they have done to earn this certification. More than that, though, I am excited to know that our students leave us with the skills they need to be successful in high school and to live their best lives.”

The announcement was made during a Leader in Me symposium in Nashville, Tennessee, and was shared with educators from more than five states and Canada. Academy of Innovation students were invited to perform for the audience via a live-stream broadcast and got to hear the announcement first hand from FranklinCovey leader Wes Bender.

“Vicksburg is shining the light for so many schools and districts,” Bender said by embracing the Leader in Me.

The Leader in Me was first sponsored in the schools by the Vicksburg-Warren County Chamber of Commerce in 2012. It has since expanded into all schools and touches every student in grades pre-K through 12. Three other schools in the VWSD have earned Lighthouse Certification, Bovina, Bowmar Avenue and Redwood Elementary.

Shealy said he is “encouraged by the results in our schools” and is “proud of the good work that is being done across the district to develop the whole child.”

“Our students are learning how to achieve goals, take responsibility and honor each other and to follow their passions,” Shealy said. “These skills will lead them to their brightest futures.”