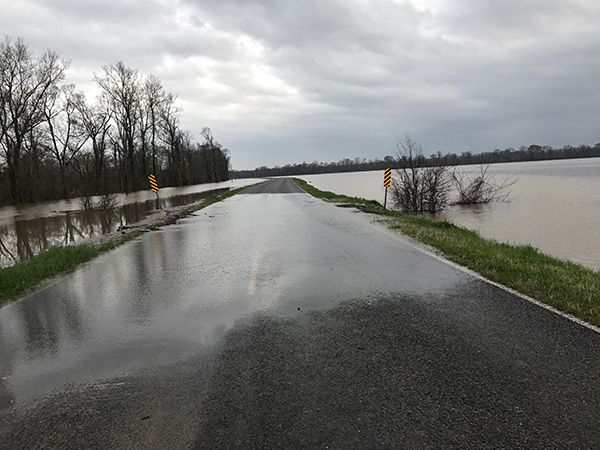 Floodwaters top a section of Highway 465 just south of Eagle Lakeshore Road and the cotton gin in the Eagle Lake community Friday. County officials have declared an immediate mandatory evacuation for residents who live in the area. (Submitted/The Vicksburg Post)

Warren County officials have declared a mandatory evacuation of the Eagle Lake community effective immediately, urging residents to leave as rising floodwaters inundate roadways and cut off the rural area.

Three members of the Warren County Board of Supervisors — District 5 Supervisor Richard George, District 2 Supervisor William Banks and District 4 Supervisor John Carlisle — met with county emergency management director John Elfer and Sheriff Martin Pace during a special work session meeting Friday morning before officially ratifying the mandatory evacuation declaration in their board room Friday afternoon. District 3 Supervisor Charles Selmon was at the official meeting in which the vote was unanimous. District 1 Supervisor John Arnold was not in attendance.

The Yazoo Backwater Levee protects thousands of square miles of the Mississippi Delta region from even worse flooding by the Mississippi River. But when officials close a floodgate keeping out the big river, water draining from the north has nowhere to go, rising inside the levee.

According to Elfer, the backwater area is expected to crest above 97 feet, but more expected rainfall this weekend and next week could increase that crest.

“This is potentially a life/safety issue,” Elfer told the board. “If they choose to stay, they need to realize emergency services will be limited.”

George said officials do not want to give residents of the area who decide to stay a false sense of security.

“It could only take one significant frog-choker rainfall event to the north and the folks who choose to stay will be looking for an ark,” George said. “They do not need to be fooling around waiting to leave from out there.”

Pace told the board Warren County deputies will remain on patrol 24/7 in the Eagle Lake community to provide safety and law enforcement.

The county and emergency management have a plan to provide a fuel storage tank for deputies to use in order to continue to patrol in the event the area is cut off completely by the floodwater.

Residents who plan to leave are reminded to shut off their meter water valve before evacuating.

Officials say approximately 500 people live or have homes in the Eagle Lake community.

The Vicksburg Warren School District is celebrating the announcement that the Academy of Innovation has been named a Certified Lighthouse... read more