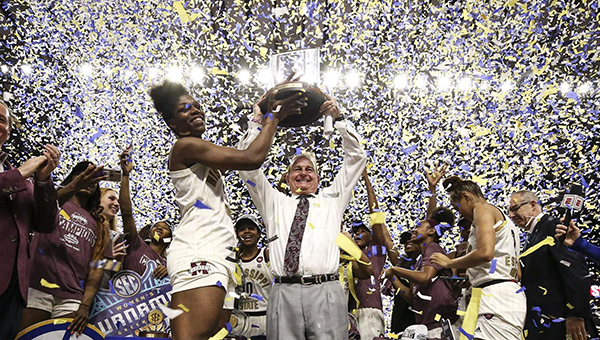 GREENVILLE, S.C. (AP) — When Mississippi State coach Vic Schaefer climbed the ladder, snipped the net and rang a cowbell, the message was clear — the Bulldogs were finally on top at the Southeastern Conference Tournament.

Teaira McCowan had 24 points and 14 rebounds, and No. 5 Mississippi State won its first SEC tournament championship in five tries with a 101-70 pounding of Arkansas on Sunday.

Schaefer has cut down his share of nets in his career, having led the Bulldogs to the Final Four the past two seasons. This one, he acknowledged, was different.

“This is certainly special,” he said with a smile, the net around his neck. “This is a first.”

The Bulldogs (30-2) and McCowan scored the most points ever in an SEC Tournament championship game — and ended their own 0-4 mark when reaching the event finals. They took control with an 18-0 run in the first quarter and never gave the Razorbacks (20-14) hope for a comeback after losing the crown the last three years to South Carolina.

This time, regular-season SEC champ Mississippi State left little doubt about who’s the league powerhouse. The Bulldogs were up by 20 at the half and 25 through three quarters on their way to their ninth straight win over the Razorbacks.

When it ended, confetti rained down on the court as Bulldog players and staffers celebrated like children out in the snow. “It’s an unbelievable feeling,” Mississippi State guard Jazzmun Holmes said.

Arkansas was the surprise of the tournament, a No. 10 seed upsetting seventh-seeded Georgia, the second-seeded Gamecocks and third-seeded Texas A&M to become the highest seed ever to make the finals.

But the Razorbacks didn’t have enough to match up with Mississippi State’s rebounding, defensive ferocity or McCowan, the 6-foot-7 SEC player of the year who was also named tournament MVP.

McCowan made 11 of 15 shots — all of them close to the basket — and had three of the Bulldogs’ six blocks.

“We were literally drawing up plays in the dirt trying to find a way to stop her,” Arkansas coach Mike Neighbors said. “We didn’t have a chance.”

She wasn’t alone in the rout as Mississippi State finished with three players with 20 or more points.

Andra Espinoza-Hunter also scored 24 off eight 3-pointers while Bre’Amber Scott had 20 points off the bench.

Chelsea Dungee led Arkansas with 24 points. The Razorbacks looked finished Saturday night until going on a 17-0 run over the last seven minutes to beat the 15th-ranked Aggies 58-51.

But the Bulldogs had the biggest advantage in the SEC in McCowan and made steady use of it throughout the championship game. McCowan continually set herself up near the basket and waited for Jazzmun Holmes and Jordan Danberry to lob the ball in. From there, it was a simple layup drill for McCowan, who hit 9 of 11 shots in the opening 20 minutes.

McCowan’s defensive presence also impacted the Razorbacks and Dungee. Instead of an open lane, Dungee was often met by McCowan and forced to alter her shot angle to get off an attempt.

Mississippi State made its share of mistakes — pesky Arkansas had seven steals the first two quarters — but typically got back on track by finding its center in McCowan.

Scott, filling in early after Anriel Howard picked up two fouls, had a perfect first half, making her four shots, three of them from behind the arc, for 13 points.

Mississippi State will now wait to see if it can grab a No. 1 seed in the NCAA Tournament. The Bulldogs are currently projected as a two-seed, with Baylor, Connecticut, Notre Dame and Louisville the four No. 1s.

“I don’t know what else you can do,” Schaefer said.

Madison Central’s baseball team has caused Warren Central a lot of grief over the years. For one day, at least,... read more