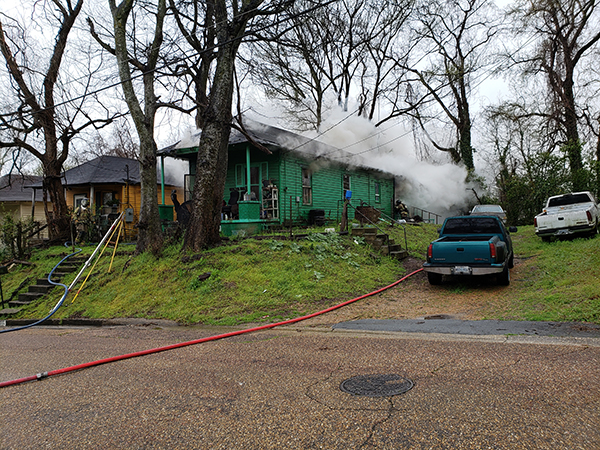 The quick action of a Vicksburg police officer helped save a man from being trapped in his burning home on Howard Street Monday.

Officer Russell Dorsey was one of the first people to respond to the 911 call about a fire at the home of Revell Howard at 1000 Howard St.

“When I arrived, there was smoke and flames coming out of the house, and the neighbors said the occupant of the home was still inside,” Dorsey said. 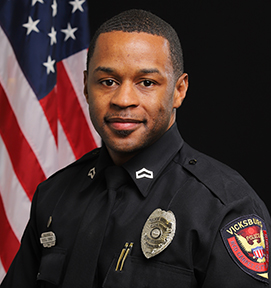 Finding the screen door to the home locked, he found a hatchet and forced the door open. He went in the front door, which was unlocked, and saw Howard standing in the front room about 5 yards from the doorway. Dorsey grabbed him and attempted to pull him out, but lost his grip and had to go back in the house.

When he went back in the house, he said, “I couldn’t see him for the smoke, then I saw his shoulder. He was trapped behind a chair. I grabbed him by the shoulder and pulled him over the chair.”

Dorsey managed to get Howard out of the house and on its porch, when officers Brad Lyons and Sammie Pruitt arrived. The officers helped Dorsey get Howard across the street and away from the blaze. He said Howard appeared to have trouble walking after he got him out.

When firefighters arrived, Fire Chief Craig Danczyk said, they found Howard was already out of the home and being helped by police officers. He said fire department paramedics treated him at the scene for smoke inhalation.

Firefighters from Engine 6, the first truck to arrive at the fire, began fighting the fire inside the home.

“We had four firefighters making an interior attack, but then we heard there were propane bottles inside the house, and we pulled them out,” Danczyk said. “We didn’t want anything to happen that would be a catastrophe. We went to a defensive situation.”

“I would like to commend officer Dorsey for his bravery,” Police Chief Milton Moore said. “One mission of our police officers is to safeguard lives, and we all are thankful that officer Dorsey was able to get in there on time.”

Evelyn Wallace retires as owner of Bovina Cafe after 40 years