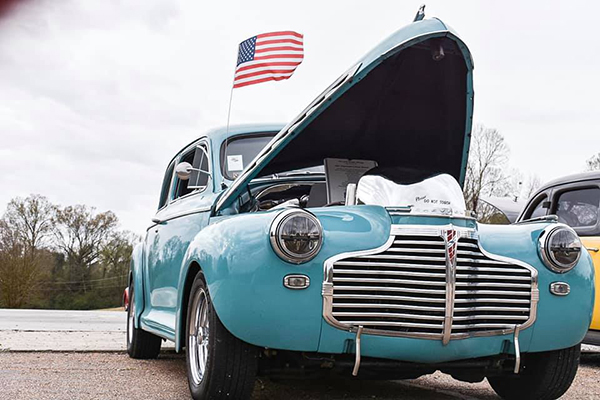 Jim and Sheila Whipp drove their 1941 Chevy 2-door Sedan 900 miles from Vero Beach, Florida, to participate in the Cruisin for Paws Rescue Rod Run March 7-9. The couple earned the award for driving the furthest distance to participate in the event. (Submitted Leigh Conerly • The Vicksburg Post)

Paws Rescue has a little more money, thanks to generous donations.

The local non-profit received monetary funds, as well as donated bags of dog food and cat food from street rodders who participated in the three-day Crusin’ for Paws Rod Run held March 7-9 at the Hampton Inn & Suites in Vicksburg.

“With the weather threatening, the turnout was not as high as what I expected,” said event organizer Al Mashburn. “We had 24 street rods registered. It only sprinkled a little during the event and was very windy, but with all that being said, with everything that we had going on to raise funds for Paws Rescue, we raised $633 for them.”

Mashburn said most of the street rodders participated in the scavenger hunt, traveling to various Vicksburg businesses and brought back receipts to be eligible for the grand prize drawing.

“We sold soft drinks, took donations, had a raffle of various items and sold 50/50 tickets in addition to the registration fee.”

He said Michael Hudson, manager of the Hampton Inn, noted “it was one of the best overall events they have hosted.”

Awards and plaques were given out Saturday, along with the raffle drawings, door prizes, ladies gift basket and the grand prize.

Mashburn also thanked members of the Vicksburg Cruisers, 1 Rule Rods and Paws Rescue in making the show a success with setting up and taking down the venue each day, selling raffle tickets, registering cars and “just showing good Southern hospitality to our guests.”

“Plans are already in the works for next year’s Cruisin for Paws Rod Run,” Mashburn said, adding he’s trying to organize an open car show in the fall to raise more money for Paws Rescue.

The Rev. Tommy Miller, who guided and directed the programs at Good Shepherd Community Center for 21 years, is leaving... read more