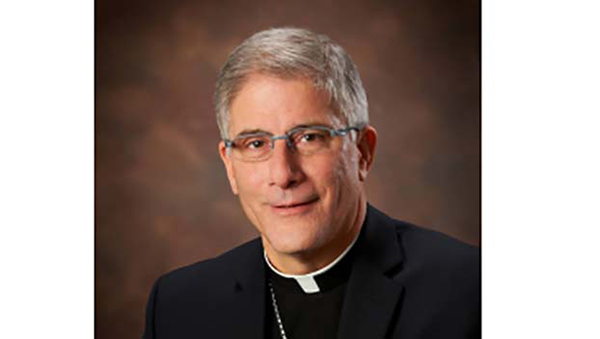 Bishop Joseph Kopacz, publicly apologized Tuesday at a news conference outside a cathedral in downtown Jackson for the alleged abuse revealed by the Jackson Diocese. (Submitted/The Vicksburg Post)

Eleven priests and one deacon who once served in parishes in Warren County were identified by officials with the Diocese of Jackson as being credibly accused of sexually abusing children.

The diocese published the list Tuesday on its website as part of the Catholic Church’s international reckoning with allegations of sex abuse that have proliferated around the world.

Bishop Joseph Kopacz, publicly apologized Tuesday at a news conference outside a cathedral in downtown Jackson.

“Every case of abuse represents shattered lives and damaged families and communities,” Kopacz said. “I hope that releasing this list will demonstrate a new level of transparency and a sincere desire to accompany victims of sexual abuse as our God of compassion and justice demands. I apologize to all the victims of abuse, to their families and to the faithful who have been hurt by this scandal.”

The victims in the Jackson Diocese were boys and girls ages 5 to 17, diocese chancellor Mary Woodward said. Woodward said the cases date from 1939 to 1998, and none of the accused clergy are still in active ministry.

Diocesan director of communications Maureen Smith said any further action against clergy members on the list would have to involve the court system.

“Our diocese is showing transparency, but sometimes transparency is not enough,” he said. “The good thing for me as a retired priest in Vicksburg is that the priests on the list are all from the past.

“There isn’t any priest on the list from the present, which tells me that our diocese really is doing a good job in the protection of children, and we priests are being more educated.”

The diocese monitors priests, youth leaders, school teachers and people who have anything to do with young people, and “I think it’s good to know that,” Curley said.

The list, “Is an effort to show we’re transparent and we’re holding accountability for what happened,” said the Rev. Rusty Vincent, pastor of St. Paul Catholic Church. “This is a step in the process.”

“My heart bleeds for all of those victims,” said St. Aloysius principal Dr. Buddy Strickland. “I can’t imagine what they’ve lived with, and for me, it’s unconscionable that that could happen. I pray for them.”

Woodward, members of an independent fitness review board and retired bishops reviewed about 1,400 files from five bishops of the diocese from 1924 to this year, she said.

In some cases, psychologists “treated a priest and deemed him safe to go back into ministry,” the diocese said in a message that accompanied the list on its website.

Any clergy member, employee or volunteer found to be abusing minors from now on will be permanently removed from ministry, the post said.

“The crime of abuse of any kind is a sin, but the abuse of children and vulnerable adults is especially egregious,” Kopacz wrote. “First and foremost, it is a sin against the innocent victims, but also a sin against the Church and our communities. It is a sin that cries out for justice.”

The Diocese of Jackson encompasses 65 of Mississippi’s 82 counties and has about 48,000 registered Catholics.

The list of clergy members who served in Warren County included:

Current Status: Excardinated to Steubenville Diocese 1955; Deceased prior to accusation 1964

Current Status: Deceased prior to accusation 1993

Current Status: Deceased prior to accusations

Current Status: Deceased prior to accusation 1983

Congregation of the Holy Spirit

Current Status: Deceased prior to accusation

Society of the Divine Word

Society of the Divine Word

Warren County ranks 51st in a listing of healthy Mississippi Counties, according to rankings released Tuesday by the Robert Wood... read more