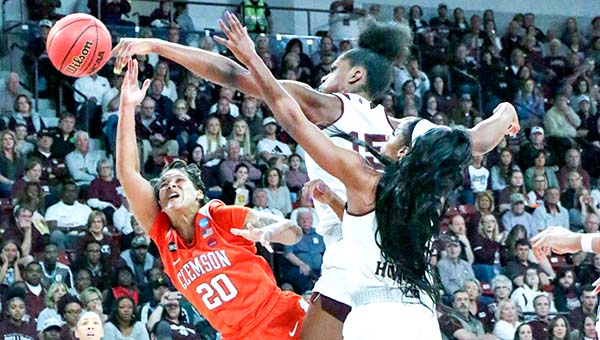 McCowan powers Bulldogs past Clemson and into Sweet 16

STARKVILLE (AP) — Teaira McCowan could feel the Clemson defense wearing down and the 6-foot-7 senior sensed the weakness immediately, carving out perfect position under the hoop.

There was no need for Mississippi State to get fancy. Everyone knew where the ball was going.

“I didn’t have to empty the playbook,” Mississippi State coach Vic Schaefer said. “I had one play.”

McCowan responded with 30 points, 11 rebounds and six blocks to help No. 1 seed Mississippi State roll to an 85-61 win over ninth-seeded Clemson on Sunday night in the second round of the NCAA Tournament.

The Bulldogs will play Arizona State in the Sweet 16 on Friday in Portland, Oregon. In the other regional semifinal, No. 2 seed Oregon will play either Syracuse or South Dakota State. Games times have not yet been set.

Anriel Howard added 21 points for Mississippi State (32-2), which has won 10 straight games in a streak that’s lasted more than a month. The Bulldogs were in control throughout Sunday night, jumping out to a 23-10 lead by the end of the first quarter.

McCowan made 14 of 17 shots, repeatedly getting good position close to the rim for easy buckets. Howard shot 6-of-12 from the field and grabbed 14 rebounds. Jordan Danberry added 18 points.

Clemson coach Amanda Butler said it’s hard to do develop a defense that can stop McCowan when she’s able to catch the ball in such good spots.

“It didn’t really feel like a chess match,” Butler said. “You get a pretty easy checkmate when you have a queen like her on the back line.”

Edwards and Simone Westbrook both scored 14 points for Clemson.

“Mississippi State is a difficult team to guard,” Edwards said. “They have some really quick guards so whenever we tried to press it was hard to keep them in front. And then you have McCowan in post, which is just going to be a problem for anybody.”

Mississippi State opened in a suffocating full-court press that forced Clemson into 12 first-half turnovers. The Bulldogs scored 16 points off of those miscues and pushed to a 41-22 lead by the break.

“I couldn’t be prouder of my team,” Schaefer said. “I thought defensively in the first half, that’s as good as we’ve been in a while.”

McCowan has 1,901 points in her career, giving her an outside shot at 2,000 with the possibility of four games remaining. She has 1,474 career rebounds, which is tops in school history by more than 350.

McCowan’s final play in Humphrey Coliseum was typical of her career. She swatted a shot from Clemson’s Aliyah Collier in the final minute and then came out of the game to a huge roar from the crowd.

“It was a great thing to seal the deal,” McCowan said with a grin. “I got the block, my sub came and the rest was history.”

Sanders stepped up to became a superstar for Warren Central

Plodding around the gym on crutches, careful not to put any weight on her injured left knee, Aniya Sanders hardly... read more