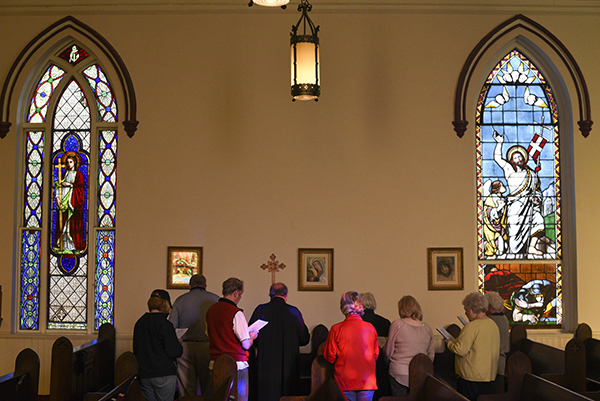 During the Lenten season, many Christians participate in a seasonal service that helps them further prepare for the coming of Easter by remembering Christ’s passion and death.

It’s a practice that began in the Middle Ages, when Christians on pilgrimage to Jerusalem retraced Christ’s journey to Calvary, stopping at various locations along the way for reflection, prayer and meditation.

The devotion later spread to churches in Europe, where a series of 14 images or small crosses were placed on church walls, and people would walk from station to station to pray and reflect on the place the image or cross represented.

The idea of having the 15th station, “Is to help us stay focused on the purpose of the passion and Christ’s death, which was the resurrection, and that’s to get us to look forward to what is to come,” said the Rev. Rusty Vincent, pastor of St. Paul’s Catholic Church. “The passion only has meaning in the light of the resurrection.”

Both the Catholic Church and the Episcopal Church have Stations of the Cross.

“We start on the Friday after the first Sunday in Lent, and then we do it every Friday up until the Friday before Palm Sunday,” said the Rev. Sam Godwin, rector of Christ Episcopal Church, adding participants are welcome to follow him to each station during the service.

The physical movement from station to station, he said, “In a way, brings it (the passion) closer to you. We talk in the church about a sacrament being an outward and visible sign of an inward and spiritual grace.

“The same way we use water for baptism and bread and wine for Communion, in a sense, that’s what the stations do for us. It gives us a physical movement and something to actually look at when we are hearing the story of the passion again.”

Godfrey said the Stations of the Cross inside the church were painted by church member Phyllis Blake’s paintings. The stations are held every Friday at 5:30 p.m.

“And here in the late evening with the sun coming through the stained glass, it just really makes it special,” he added.

Godfrey said the last stations are held the Friday before Palm Sunday in the church garden.

“We have a different set of images and the version we use there is one written by a Catholic priest, Jeff Bayhi, and sung by Aaron Nevill. That’s a particular moving piece, and there’s several different versions here that we use. One of them is from the viewpoint of Mary.”

Sometimes, he said, the stations in the garden are done later “because we try to tie it closer to sunset, but Lent being so late this year, it may start a little bit later.”

Vincent said the Stations of the Cross are important to the Lenten season “because we’re preparing for the passion for the death of Christ, and the stations follow him from the moment he was arrested all the way up to moment of the crucifixion and him being taken down from the cross.

“We follow that path that he would have walked, so the importance for us spiritually is that we walk along with him so we enter into the passion with him, and it helps us reflect on the suffering he endured for us and for our salvation. It really helps us enter into why we’re doing the things we’re doing during the Lenten season.”

He said the practice of the stations hasn’t changed much from the earlier years, adding when he went to the Holy Land, the stations were marked on the street where it happened, “so you can pretty much follow them to this day where he was at when all the moments happened.”

Unlike the Episcopal Church, the Catholic Church holds the stations on Good Friday.

The stations on Good Friday, Vincent said, have a special meaning than the services on other Fridays in Lent.

“Typically, you would do the stations on Good Friday at 3 o’clock, which is the hour he would have died, so you’re entering more into closeness to the passion with that.”

St. Paul and St. Michael Catholic Church hold Stations of the Cross every Friday during Lent at 5:30 p.m., while St. Mary’s holds the stations at 6 p.m.

The Daughters of the King at Church of the Holy Trinity will have Stations of the Cross April 17 at 5 p.m.

Potential tech center to get $2.5M from state

The Mississippi Hardware building project is expected to get more than $2 million under a plan by the Legislature to... read more