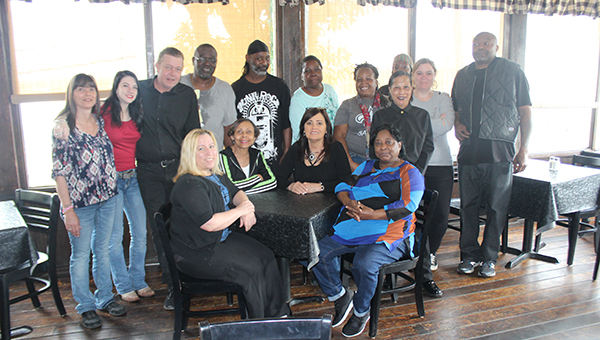 Kay Daniel is where she wants to be.

“I love this building,” the owner of the Biscuit Company of Vicksburg said.

Daniel bought the business from Eddie and Kay Monsour, and officially took over Monday.

She expects to open in about two weeks.

The menu, Daniel said, will be more focused on catfish and southern cooking, but she will still have the same specials offered under the Monsours’ ownership.

“We’ll still have steaks and seafood and sandwiches and wraps, and we’ll be open for lunch and dinner. We’re  going to be doing the blue plate specials on Monday through Friday still, steak night on Wednesday and the boiled shrimp night on Thursdays, and the Sunday buffet.

“These are the main things that people have asked to keep, and it works; it’s good. I kept the same staff. I didn’t lose one employee and that’s pretty much unheard of.”

“My real career was a personal fitness trainer and gym owner, Body by Kay. I sold my gym to a physical therapy company and stayed home for about three years, and my husband was gone all the time working for the Corps of Engineers, and I got bored sitting at home.

“I started bartending for a friend and I just loved it. When I came to 1311 (Washington Street) downtown about 7-8 years ago, I just loved it; I loved being down here and I always loved this building.”

She also worked at KJ’s Riverfront Grill on Washington Street. She was working as a bartender at Monsour’s when she was approached about buying the business.

The Monsours, she said, had been trying to get her to buy the business for about two years. She decided to do so when Kelle Barfield bought the building. Barfield buying the building, Daniel said, influenced her decision.

“That was the attraction to me because she’s a good manager. I wasn’t real sure with the previous owners what their future with this was. If something happened to the owner, what would his family done with it? I didn’t want to invest a bunch of money and then in two months be told I’ve got to get out.

“Kelle Barfield is a great landlord. She’s so nice, she’s awesome; I really like her. Eddie and Kay told me somebody had bought the building, but they didn’t say who. “When I found out, I met her; I knew it was time. She cares about downtown too. She’s putting a lot of effort into downtown and I’m all about having downtown prosper.

“This town’s fixing to boom. We see a lot of tourists now, we need a good place, and we don’t have a good catfish house here any more, and our catfish is going to be good. It will be prepared fried, blackened or grilled.”

Daniel said she wants to restore the dining atmosphere she remembered from her earlier years in the business.

“I want it to be the place it used to be. Used to, it was more of a friendly place; everybody came, and it just had this great atmosphere,” she said.

“Back in the ’80s, this was my favorite building. We have great clientele here, the customers here are really good and I look forward to the customers who will be coming back.”

She said some changes will be made to the interior of the restaurant, adding, “My interior designer is Ron White who owns Grey Oaks Mansion and he’s got some great ideas. I want to have a good place for the people to go.”

One plan is to have a separate entrance to the restaurant’s bar, so people going to the bar will not disturb diners.

The response to the word she bought the business, Daniel said, has been tremendous.

“My Facebook page and my Instagram page in less than an 48 hours had over 400 likes almost 500. The calls, the texts, the messages, the response is great. And the people who are helping me with this … I have friends just coming in and helping me do the things that need to be done.

“I’m just so blessed. There are people in my life who are willing to help me take this risk.”

Working in the restaurant, Daniel said, “Is more fun to me, it’s not work. It is work, but it’s fun. I never dreaded coming to work when I do this; I love working with people.

Mayor lists 19 buildings he wants up to code

Mayor George Flaggs Jr. has launched the first phase of his campaign to bring vacant commercial buildings up to code,... read more