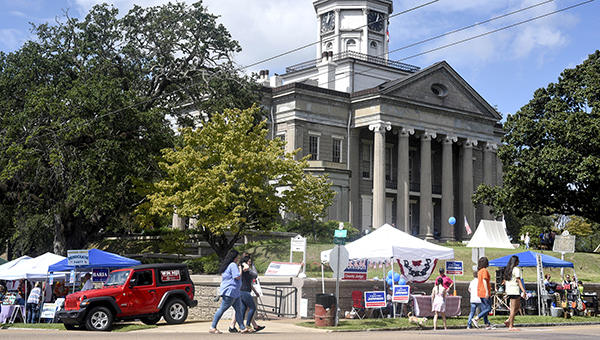 file • The Vicksburg Post ON SUNNIER DAYS: In this file photo, residents looking to enjoy a nice spring day and shoppers looking for a great item converge on the Old Courthouse Museum Flea Market. Event organizers are hoping a weather system, expected to bring high winds and heavy rain late Saturday will not arrive in the area until well after this year’s event is over. The flea market is scheduled to open Saturday at 8 a.m. around the Old Courthouse Museum in downtown Vicksburg.

Area officials and event organizers are keeping an eye on the weather in the wake of predictions of severe weather Saturday.

The storms are part of a warm front expected to pass through the area Saturday.

“We are looking at severe storms likely on Saturday, probably late Saturday afternoon, and going into the evening and potentially the overnight hours,” said Joanne Culin, a meteorologist with the National Weather Service Office in Jackson.

“We are likely to have severe storms with tornadoes, larger hail — potentially to golf ball size — and damaging winds at least 60 mph.”

“The whole county is at risk.”

The threat of severe storms has already forced the cancellation of two events: the Vicksburg National Military Park has rescheduled its park cleanup day initially set for Saturday to April 20.

Bubba Bolm, director and curator of the Old Court House Museum, said the spring flea market will be held as scheduled.

“I believe we may be able to get half a day before the weather sets in,” he said.

Vicksburg native Anita Parrot George was named an honorary canon to the Cathedral Church of St. Andrew in Jackson during... read more