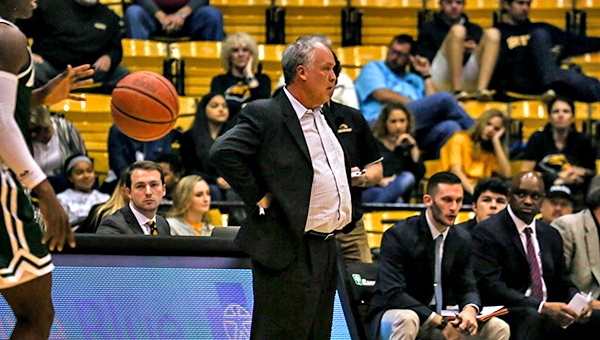 HATTIESBURG — Doc Sadler guided Southern Miss’ men’s basketball program through a difficult era. Now he’s letting someone else take it into the next one.

Sadler, who coached the Golden Eagles for five seasons, announced his resignation on Thursday. He had one more year left on his contract, but said he felt it was time to move on.

“It’s been a tough day,” Sadler said at a press conference Thursday afternoon at Reed Green Coliseum. “It’s something I’ve been thinking about for a while. I’ve come to this decision myself, after talking with (athletic director Jeremy McClain) a few times. If I’m going to ask kids to give everything, then they should get that in return. It’s time for me to step back and evaluate what I want to do.”

Sadler guided Southern Miss to a 20-13 overall record this season, including an 11-7 mark in Conference USA. The Golden Eagles finished tied for second in league play, which was the highest finish in the Sadler era.

They lost to Longwood in the first round of the College Basketball Invitational, which was the program’s first postseason appearance since 2014. The 20 wins were also the most since that 2013-14 team won 31 games. Most of the victories were later vacated because of recruiting violations.

Sadler arrived at Southern Miss in April 2014 and guided the program through an uncertain time as the Golden Eagles played through NCAA sanctions with limited scholarships.

Sadler only had a 63-91 record at Southern Miss, but 36 of the 63 wins came in the past two seasons as the NCAA penalties started to ease.

A national search for a new head coach will begin immediately, McClain said.
McClain was hired as Southern Miss’ athletic director last week, and is not scheduled to fully take over the position until May. He will remain in his current job as Troy University’s athletic director, but will also assist in the Southern Miss coaching search. He attended the press conference Thursday in Hattiesburg.

“I think it’s a unique situation,” McClain said. “The timing and the timeline is critical from a student-athlete perspective, from a recruiting perspective. We are well into April and it’s a critical time for us in basketball terms.”