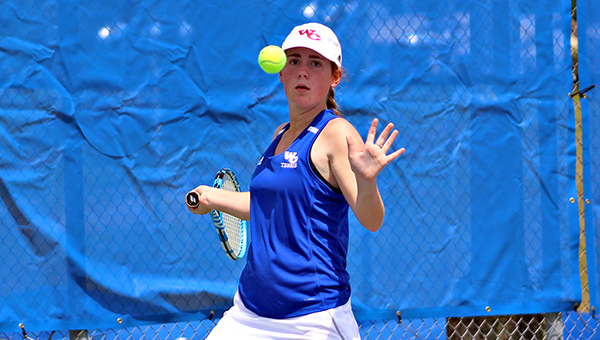 Warren Central’s Jane Hopson returns a shot during a girls doubles match Thursday against DeSoto Central. Hopson and her partner Laney Smith won 6-1, 6-0 to help the Vikings to a 6-1 team victory in the MHSAA Class 6A playoffs. (Ernest Bowker/The Vicksburg Post)

After a few years of playoff failures, memories of the last success for Warren Central’s tennis team had become a little fuzzy. Whether it was five years or six, the only consensus was that it had been a while since they’d had one.

They can restart the clock now.

The Vikings did not drop a set, and only lost 10 games total in six victories as they stormed past DeSoto Central 6-1 in the first round of the MHSAA Class 6A team playoffs Thursday at Halls Ferry Park.

“Being able to compete in the playoffs every year is an accomplishment. When you get there and you have a goal to win and you can’t accomplish that, it becomes taxing. The next year there’s a little less gusto,” Warren Central coach Steve Summers said. “Something like this is not just big for our program at Warren Central, it’s a statement about the Vicksburg (tennis) community as a whole.”

Warren Central (12-3) advanced to play either Oxford or Northwest Rankin in the second round next week. Those teams were scheduled to play a first-round match on Friday, although there was a good chance it could be postponed by rain.
Oxford eliminated Warren Central from the playoffs last season.

“We know Northwest well. We scheduled them last year and traveled and played,” Summers said. “Oxford had their boys and girls singles both graduate last year and they’re playing Division I tennis this year. So we know Oxford is down a little bit, but saying they’re down is a little misleading because they have a team full of quality players. It’s four courts. My mindset is where is the four we’re going to win?”

On Thursday, Summers found those four and then some.

The Vikings won every match except for girls singles, and all in straight sets. The two boys doubles matches were the only ones they dropped more than one game in. Steed Springfield and Ian Gordon beat DeSoto’s Trace Dye and Rocko Bufkin 6-3, 6-1 in No. 1 boys doubles, and in the No. 2 position Gordon Wilkerson and Brayden Robinson defeated Ben Roberts and Kason Jones 6-3, 6-0.

In mixed doubles, John Jabour and Audrey Jennings beat Ashylnn Mensell and Riley McCool 6-1, 6-0 to rebound from a loss in the Region 4-6A individual tournament on Tuesday.

“Mixed doubles was our strongest court and we took that court 1-and-0. So I was very pleased to see our mixed bounced back. They came out crisp and firing, and there was no lull at all from that loss,” Summers said.

“They were goofing around a lot, and me and Jane took it really seriously because we really wanted to win. It would have been our last team match, so we took it serious and got it done,” Smith said.

The No. 2 girls’ doubles team of Madison Embry and Elaina Bailey beat Lily Bufkin and Ella Abadie 6-0, 6-0 to remain undefeated this season. Summers said the two girls doubles teams are the key to how far the Vikings can go in the postseason.

“The girls have been the strength of this team all year. The first court decided here was our girls-two, who are still undefeated. It was 40 minutes and they were off,” Summers said. “Girls-one came to the net when they had an opportunity to and took care of business, and that’s what we coach. Be consistent and when you have an opportunity come to the net and shorten the points. They’ve been doing it all year. As we get deeper into the playoffs, those girls courts are the ones we’re going to have to have.”