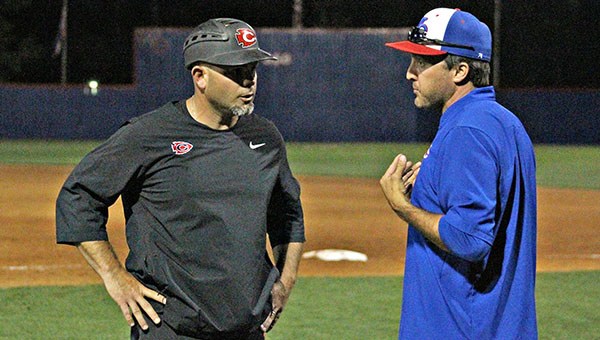 Clinton coach Trave Hopkins, left, and Warren Central coach Conner Douglas talk after Thursday’s game at Viking Field. The game was called in the sixth inning after the third in a series of power outages. Clinton won, 6-2, to clinch the Region 4-6A championship. (Ernest Bowker/The Vicksburg Post)

Clinton beat Warren Central 6-2 on Thursday night to take the season series between the teams and clinch the Region 4-6A title. The game was called in the bottom of the sixth inning after a bank of lights in left field went out for the third time in an hour.

The Vikings and Arrows resumed play after the first two outages, which each lasted about 15 minutes, but umpires immediately called the game when the lights went out again.

It’s believed the recurring outages were caused by a wire that was damaged during maintenance work earlier in the year.

“It’s very frustrating. We started having better at-bats there at the end. We had five outs left. This is baseball. It shouldn’t end that way,” Warren Central coach Conner Douglas said. “A game should be completed, especially a division game. I could understand if it’s a game that doesn’t have any factor or is a non-division game, but this game should be completed and not ended because of a power failure.”

The sudden stoppage set off a celebration for Clinton (13-7, 8-1 Region 4-6A), but angered Warren Central (17-8, 7-2). Douglas said there was no mention of a potential stoppage when he, Clinton coach Trave Hopkins, umpires, WC principal Eric Green and Vicksburg Warren School District athletic director Preston Nailor discussed the issue during the first two outages in the fourth and fifth innings.

“The last time we talked at the plate, we had an agreement — Hop and I, with the principals and all of them standing there, that we were going to finish this game,” Douglas said. “We’re not going to have a game end because of the power. That’s the last thing we agreed upon. The umpires apparently called someone at the MHSAA, (Robert) Holloway who is the head of officials, and they said if five is completed and it happens again to bang it.

“This was not a rainout. We could have turned them back on and played if they said you had to play it,” Douglas continued. “That discussion they had with Holloway was never discussed with our administration or coaches. So when that happened, they banged the game. It should have never happened. A division game should be completed.”

Nailor said an appeal to the Mississippi High School Activities Association was turned down Friday morning. Officials there cited the rulebook that deems a game official after five innings if weather or field conditions interrupt play.

Hopkins said coaches and officials discussed moving the game on the fly during the second outage, but alternative venues at Bazinsky Field and Sports Force Parks on the Mississippi were not available on such short notice and moving the game 30 miles east to Clinton at 9 p.m. was not a realistic option.

A rainy forecast for the weekend also made suspending the game an unpalatable option. The winner of Thursday’s game got a first-round bye in the Class 6A playoffs, while the loser finished second and has to turn around and play a best-of-three series beginning next Thursday or Friday.

“Neither one of us wanted to suspend it because of the rain. Then with the way it’s set up, if you play Monday or Tuesday you may have to turn around and play Friday. Nobody wants to throw their arms in that situation. We just tried to play through it,” Hopkins said.

When it was all said and done, Clinton left Viking Field with the region championship and the coveted first-round bye. Warren Central will have to play in the first round next week and will also have a much more difficult road through the playoffs.

Oxford and Tupelo play each other on Monday to determine the second and third seeds from Region 2-6A. The loser will play Warren Central.

“You’ve got to beat everybody eventually to get the Big House anyway, so it just makes the road a little tougher,” Douglas said. “But it is what it is. We made our own bed, we’re going to sleep in it, we’re going to bounce back and go to work.”

Although the power outage ended the game, Warren Central did plenty against Clinton to put itself in a bad situation.

Christian Johnson led off the game with a home run for the Arrows and later added an RBI double to finish 2-for-3 with two RBIs and two runs scored. Warren Central committed two errors that led to three unearned runs.

The Vikings cut a 4-0 deficit in half with a pair of runs in the bottom of the fourth inning, but missed a chance to get more. After they loaded the bases with one out, Clinton pitcher Dallas Dyar struck out two batters to get out of the jam and strand runners at second and third.

Then, in the top of the fifth, Johnson hit his RBI double and scored on a single by Dyar to get both of those runs back and push the lead back to 6-2.

Warren Central did not score in the bottom of the fifth, and leadoff man Hank Holdiness was at bat in the sixth when the lights went out for the final time.

“They swung it really well. All of this crazy stuff that was happening, tip your hat. They did a hell of a job,” Douglas said of Clinton. “They swung it well and competed. Dyar didn’t throw bad. They beat us. We made a couple of mistakes that gave them some more bases, but they swung it well.”