Personal accounts of tornado are harrowing 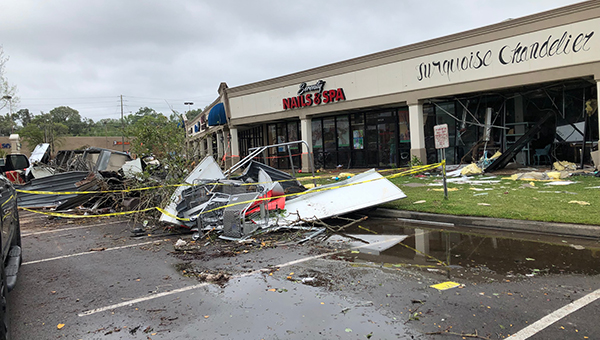 Clean up is under way Sunday of the strip mall on Pemberton Boulevard, next to Kroger, which sustained heavy damage from Saturday’s tornado and storms. (Terri Cowart Frazier/The Vicksburg Post)

As the sky grew dark, it was obvious the severe weather predicted for the Vicksburg area was moving in.

It was time to shelter in a safe place.

Lexie Crocker, who is an employee of Split Ends Family Salon on Pemberton Boulevard, was at the shop when the storm hit.

“It was horrible,” Crocker said. “I have never experienced anything like this in my life and all that was going through my mind was just let it be me and not my baby.”

Crocker, along with a fellow employee, and her two-year-old daughter were “hunkered down,” she said, in an interior room of the salon.

“Our ears popped and then the roof of the room we were in came off,” Crocker said.

“After that is all just a blur,” Crocker said.

“It came through and we just didn’t know what was going to happen. I could see the sky and I had them (her co-worker and her child) crouched under me and I just kept telling her to hold my baby.”

Split Ends is located in a strip mall near Kroger and the entire facility sustained damage.

“They are almost thinking it is going to be a total loss, because the building is starting to separate,” co-owner of the salon Bonny East said.

And with tears in her eyes, she added, “This is just devastating. You know if we don’t work we don’t make money.”

Carter’s Jewelers’ manager Ginger Richards said their store, which is also located at the strip mall, had two employees still on the job.

“They hid under the desks in the back,” Richards said.

And fortunately, because of the weather warning, all of the jewelry store’s repairs and valuables were already locked in the vault, she said.

However, employees returned later that evening, Richards said, to move the valuables to their store in Jackson.

And in their return she said, they found the store was standing in about eight inches of water.

While the damage was great, Richards said, “ I am just so thankful to God that none of our employees were injured.”

Gary Thomas, who is the owner of Goldie’s Express on Pemberton Boulevard, and whose business also sustained damage from the storm, said, ““It could have been a lot worse. I got sign damage, I got a little roof damage and my power pole got snapped.”

Also, a roof from one of Thomas’ sheds was blown down the street.

“My main structure is ok. We are so lucky,” Thomas said.

“There was lots of debris and we have already cleaned most of that up.”

Thomas said he had been watching the radar on his phone to keep track of the storm and saw where the first storm had moved west towards Mounds and towards the Redwood Area.

But the second storm was the one that just “popped up” he said.

“I actually saw clouds 10 to 15 minutes before it hit,” Thomas said, adding he even texted his daughter to tell her about the clouds he saw rotating back from the east to the west.

“And I said that’s crazy with the system that’s moving southwest to northeast.”

And with only a few minutes warning, Thomas said he along with his employees took shelter.

“As soon as the power went out and we heard all the wind, I got them all to the back of the building,” Thomas said.

“They were all actually somewhat calm. I also had two guys outside who got in the walk-in cooler outside,” Thomas said.  “They were out there on the crawfish trailer and I had told them earlier that if it starts getting ugly to get inside the building (cooler) or either come inside, and they got inside the walk in cooler.”

While no one was hurt during the storm, Thomas said, “It was bad.”

“I have been here 28 years and this is the worst ever. Katrina was bad and it affected a lot more area, but I have never seen a strip like this come through. I have always said, ‘when’s it going to happen and it happened.’ It wasn’t’ an F5, but it was bad enough. I don’t want to see anything worse.”