Still early, but damage is significant in city, county 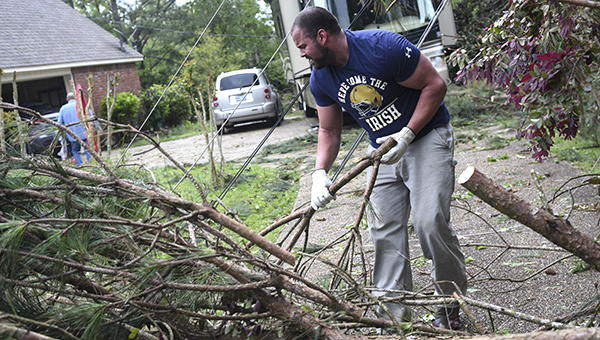 Officials from the Mississippi Emergency Management Agency and county workers are evaluating Vicksburg and Warren County, but it could be several days before city and county officials learn the extent of damage caused when what was believed to have been a tornado struck the area.

That was the estimation of Warren County Emergency Management director John Elfer at a press conference held Sunday afternoon by city and county officials at the Robert M. Walker Annex to update residents on the damage and problems caused by the storm.

“This is the worst thing that has ever happened in my lifetime in Vicksburg,” Vicksburg Mayor George Flaggs Jr. said. “It was pretty devastating, but we still thank God that there’s some good news. The good new is that as of now, there were no reported injuries or fatalities.”

Elfer said the assessment of damage in the county was almost complete, “and once they’re completed, we’ll focus on the city to make sure we capture everything in the city of Vicksburg.”

He said the assessments could possibly take up to two days to complete.

Elfer said at least 35 homes in the city and county and 15 businesses — mainly in the city — have been damaged.

“We still have about seven or eight city streets that are closed, and approximately 10 county roads that are in some way are affected, whether they are closed of damaged,” he said.

Lea Turnipseed, Entergy vice president for customer service said about 7,000 customers in Vicksburg and Warren County were without power. She said power would be restored to hospitals, nursing homes and first responder stations first. She also cautioned homeowners to be careful using portable generators.

Warren County Sheriff Martin Pace and Vicksburg Police Chief Milton Moore cautioned people from going into closed areas. Moore said anyone caught breaking into a home or business would be arrested and prosecuted.

Flaggs said another press conference would be held Monday at 1 p.m.