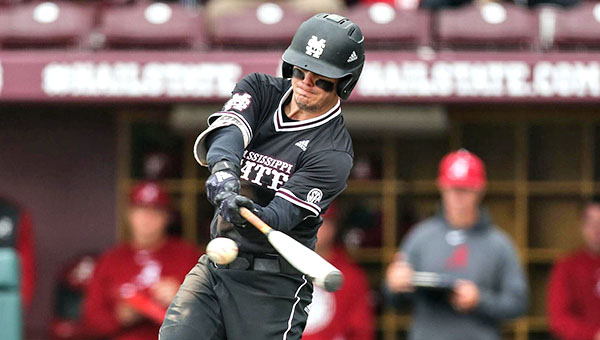 Mississippi State’s Jake Mangum hits the baseball Sunday against Alabama. Mangum was 2-for-6 in the Bulldogs’ 13-3 victory. He also scored the 200th run of his college career and extended his hitting streak to 17 games. (Kelly Donoho/Mississippi State Athletics)

Even at No. 3 in the country, there’s little margin for error in the congested Southeastern Conference standings. That’s what made Mississippi State’s win Sunday over last-place Alabama much more than just an afterthought.

The Bulldogs finished off a dominant three-game sweep of the Crimson Tide with a 13-3 rout at Dudy Noble Field. Getting the sweep pushed Mississippi State (31-6, 10-5 SEC) ahead of five other teams that are right on its heels in the SEC West at the halfway point of the conference season.

“The difference in sweeping or going 2-1 is a two-game (swing), and for us, we need to make up some ground so it was big for us this weekend and as we move forward,” Mississippi State coach Chris Lemonis said.

Six of the seven teams in the SEC West are within two games of the lead. Mississippi State is alone in first place, though, at least for the moment.

That meant taking care of business against Alabama, one of the few truly struggling teams in the league, was essential and the Bulldogs did just that.

They outscored Alabama 28-4 and never trailed at any point in the series.

Justin Foscue’s two-out, two-run bloop double down the right field line in the bottom of the first inning got the Bulldogs going on Sunday, and they led 7-0 before Johnny Hawk got Alabama on the board with a solo home run in the fifth inning.

Mississippi State had 13 hits on Sunday, seven of which went for extra bases. Tanner Allen was 4-for-6 with three doubles and three runs scored, and Marshall Gilbert hit a solo home run.

“That is the game plan every day: be on the fastballs and see the off-speed up. Work gap-to-gap,” Allen said after Sunday’s win. “We had a great plan against that guy today and it showed. I think we had six runs in the first two innings off of him. He had a good arm. Ninety-four (miles per hour) fastball. He had a good curveball, but we were able to put good at-bats together and manufacture runs. That was the difference of the game.”

Thirteen of Mississippi State’s 36 hits in the series were for extra bases. It hit five home runs, including three in a 9-1 win on Saturday.
Coupled with some strong pitching, it made for a fun time on Super Bulldog Weekend in Starkville.

Ethan Small started the series by striking out a career-high 15 batters in six innings in a 6-0 win on Friday. Peyton Plumleee threw five shutout innings in the 9-1 win on Saturday.

Finally, on Sunday, freshman J.T. Ginn allowed four hits and had four strikeouts in four innings before giving way to the bullpen. After reliever Cole Gordon gave up three runs in 2 2/3 innings, Riley Self and Colby White cleaned things up with 2 1/3 scoreless innings on the back end.

“It feels good. I think we played really good baseball this weekend and we looked really good in all aspects of the game,” Ginn said. “It was good to go out there and get a good, dominant win right there.”