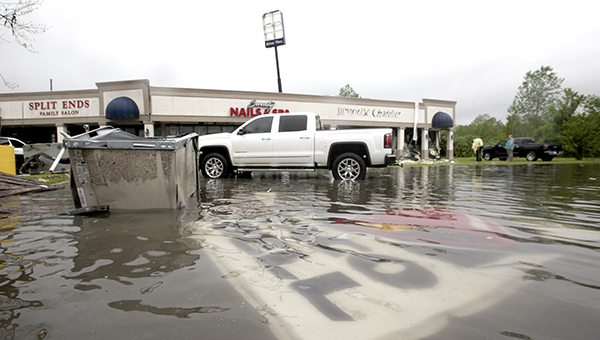 The Warren County Board of Supervisors and the Vicksburg Board of Mayor and Aldermen have issued emergency declarations in the wake of damage caused by three strong tornadoes that hit the area Saturday evening.

Mayor George Flaggs said Monday afternoon Gov. Phil Bryant has issued a disaster declaration for Warren County and other areas in the state affected by tornados.

“After this, there should be no doubt that there is a God,” Mayor George Flaggs said after the board’s vote on the declaration Monday morning. “Most of the damage to the city’s buildings was minimal,” he said, adding, “We’re going to get through it.”

He said the city’s water and gas administration building on Monroe Street, where the city’s utility billing is handled, was without power, and the employees have been moved temporarily to the Robert M. Walker Annex on Walnut Street.

At the afternoon briefing, Flaggs commended the management of Kroger on Pemberton Square Boulevard for its actions keeping store customers inside when the storm hit.

“We were blessed not to have any (serious) injuries or deaths, he said. “Had not Kroger made the decision (to keep its customers inside the store), we would be talking about some deaths.

“We prepare for high water,” Flaggs said. “We didn’t know it (a disaster) would come by air and by rain and wind like it did. We haven’t had anything like this since 1953. It was devastating.”

Warren County Emergency Management director John Elfer outlined the present damage toll after a series of assessments in the city and county, pointing out 55 homes damaged by the storm. Six of those, he said were destroyed, and 10 had major damage.

Fourteen businesses were damaged, with one business destroyed and one church was damaged.

“That number is increasing,” he said, adding an updated total would be made later.

According to the National Weather Service, the first tornado touched down about 5:04 p.m. near Walmart on Iowa Boulevard, where it knocked down some large limbs and also damaged some plants and materials before moving on and causing damage along Pemberton Square Boulevard.

The second hit about 5:08 p.m. at the intersection of Bowmar Avenue and Jeanette Street, where it hit a brick home, taking the roof off and caving in the front of the home of Yolanda Grissom on Jeanette Street.

Grissom was at work when the twister hit the house, where her daughter, grandchildren and fiancé Don Larry were huddled in the hallway of the house.

“We heard that train sound and the wind,” Larry said. “The windows were breaking out and then the roof went off the house. We heard this ‘whoosh;’ it sounded like an explosion and the house caved in. The rain was coming in hard and it was hard to see.”

He said he took the two grandchildren and began looking for a way out. He found a doorway at the rear of the house, but it had collapsed, and he yelled for help. He said a neighbor came and helped him with the younger children, then helped get Grissom’s daughter, who was pregnant, out.

The woman was later taken to University of Mississippi Medical Center.

Grissom said she learned about the house when a neighbor brought Larry to her and he told her what happened. Presently, she said, the family is staying at a hotel.

After hitting the house, the tornado made its way across the central part of the city before hitting the Vicksburg National Military Park.

“We had a lot of trees down in the park,” park superintendent Bill Justice said.

He said park maintenance crews were able to clear the park’s roads Sunday, and park officials were now taking an assessment of the damage. He said the Rhode Island monument was damaged when a tree fell on it and crews were finding some erosion problems.