Annual flea market gets in before the rain 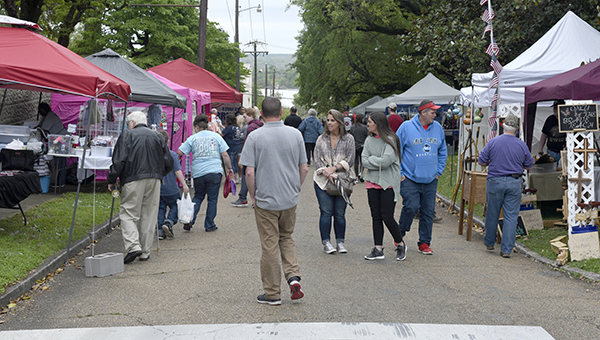 The city of Vicksburg comes together year-round to celebrate different occasions.

April 13 was no different as locals crowded downtown streets for the annual Old Courthouse Flea Market.

The flea market started at 10 a.m. despite the gloomy weather as residents and vendors set up to show off their goods.

“My husband and I have been coming for years because we do live here and we enjoy it,” Deborah Martin said. “There seems to be a little less of a crowd than I thought it might be, but that’s why we come.”

There were food, toys, clothes and just about anything one could imagine.

Some of the vendors were new, while some have been a part of the tradition for many years.

“We’ve just started our business and this is our first Market,” said Pat Maher. “It’s supposed to be a big (event), but with the weather there haven’t been too many people showing out. But we’ve still had a lot of visitors and we’re just enjoying showing everybody what we do.”

Though the flea market does not come around as much as some people would like, it has still proven to be a part of Vicksburg history.

The event gives locals a chance to reconnect with people who they may not have seen since the last flea market. For visitors from out of state, it gives them a chance to make connections and see what Vicksburg is all about.

“The courthouse here has operated as a museum for several years,” Bubba Bolm, director if the Old Courthouse Museum said. “The reason being is because we formed the Vicksburg and Warren County Historical Society 70 years ago to save this building.”

The funds help to keep the Old Courthouse Museum maintained and running.

This story is written by Gabrielle Terrett for The Vicksburg Post.