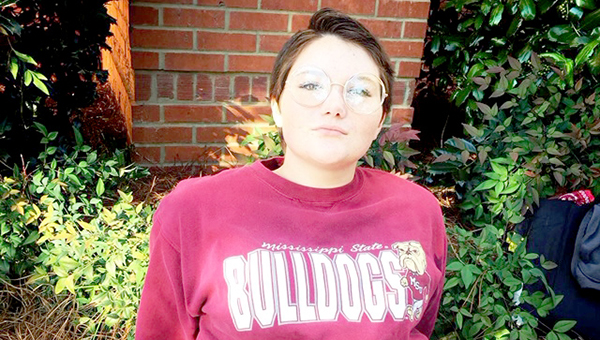 Sara-Beth McKellar poses for a picture outside her home. McKellar suffers from three different forms of epilepsy, and her family is in the process of trying to raise $25,000 to go towards a Epilepsy Response Trained Service dog. (Submitted Photo)

As a senior at Warren Central High School, she is active in the band, a member of the National Honor Society and is ranked in the top 25 of her class.

However, there is a medical condition that sets her apart from her peers.

Sara-Beth suffers from  three different forms of epilepsy, and in looking towards advancing on to college, she and her family are trying to raise $25,000 to go towards an Epilepsy Response Trained Service Dog.

“The dog can be trained to alert 911, turn water off in the bathroom, open doors, and the dog could eventually be able to sense her (Sara-Beth’s) body changes to know if she is going to have seizure and then get her to sit down so she doesn’t’ hurt herself,” Sara-Beth McKellar’s mother Kiely McKellar said.

The idea to get a service dog came after an incident, that Kiely McKellar called “scary.”

“She (Sara-Beth) was in the bathroom and had a seizure and fell and busted her toilet and the bathroom started flooding, and we could not get to her,” Kiely McKellar said.

“This was a horrible thing to witness as a parent. We couldn’t get to her because of the way the door opened to her bathroom, so when she fell out in front of the bathroom door, she was trapped between the wall and toilet and was constantly seizing and hitting her head.” Kiely McKellar said, adding, “We thought we were prepared, but we had not thought about how the bathroom door was installed.”

It was after this incident, Kiely McKellar said, that she began to research therapy dogs.

“I found a few that wanted us to send our daughter to them for a couple of weeks to train the dog, but we weren’t allowed to come because they wanted it to just be Sara-Beth and the dog,” she said.

Kiely McKellar said she was not comfortable with this concept and continued her search until she found a company out of Madison, Virginia.

“They will actually follow Sara-Beth and the dog for 18 months, so once she gets the dog they will come and help her train the dog in different scenarios,” Kiely McKellar said.

Sara-Beth said she looks forward to getting a service dog.

“I like animals and it will be nice to have a dog to protect me since I am going to college, and I won’t always have somebody around me who knows how to respond to seizures,” Sara-Beth said.

Currently the family has raised nearly $14,000 for the service dog.

One of which will be held on April 27 at Triumph Church.

The fundraiser will run from 10 a.m. to 2 p.m. at 136 Honeysuckle Lane and will include burger, a silent auction and games.

A fundraiser will also be held on May 25 at Wyatt’s gym.

Kiely McKellar said donations can also be made in Sara-Beth’s honor at SDWR Service Dogs, which is the organization that will provide the service dog.

For more information or to donate online directly, visit tinyurl.com/sarabethdonation or one can make checks payable to