Oxford knocks Warren Central out of Class 6A tennis playoffs 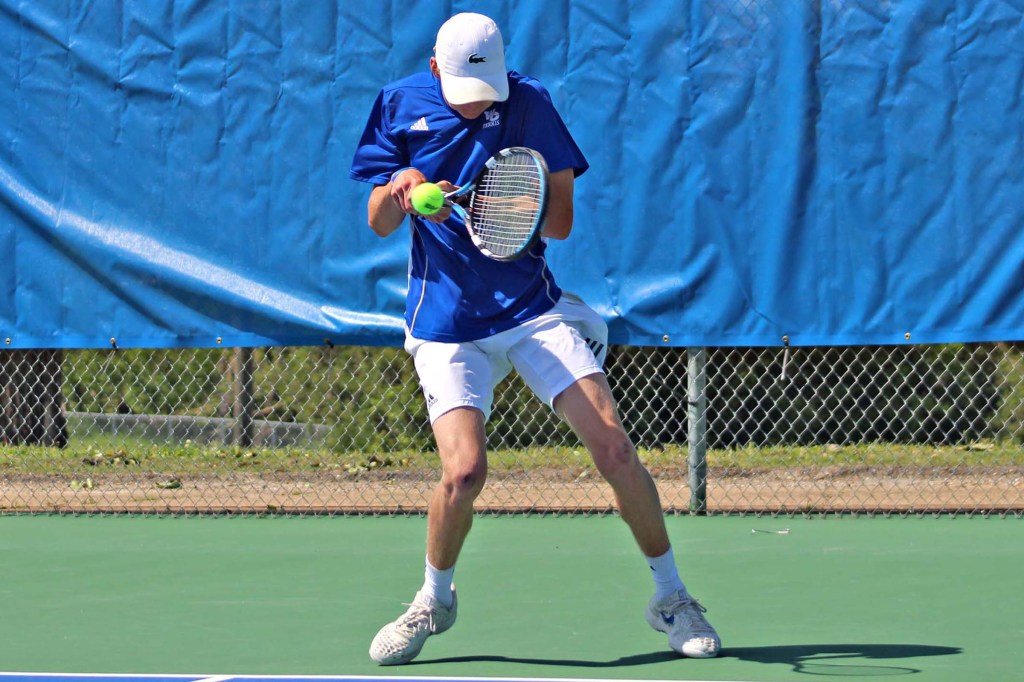 Warren Central’s Steed Springfield returns a shot during a boys singles match against Oxford’s Mack Schuesselin on Tuesday. Schuesselin won 6-1, 6-0 and Oxford beat the Vikings 7-0 in the second round of the MHSAA Class 6A tennis playoffs. (Ernest Bowker/The Vicksburg Post)

For Warren Central, reaching Tuesday’s quarterfinal round of the MHSAA Class 6A tennis playoffs was a big step forward. For Oxford, it was just another step on the road to a championship.

Oxford dominated four matches, weathered the storm in the other three, and swept Warren Central out of the playoffs with a 7-0 victory at Halls Ferry Park.

It was a disappointing finish for Warren Central, but still a satisfying season. The Vikings finished with a 12-4 record, double their win total from a year ago, and reached the second round of the playoffs for the first time in six years. They also have nine players going to the Class 6A individual tournament April 29-May 1 in Oxford.

“It was a good season. I’m super proud. We’re sending nine athletes to compete in the individual tournament, and there’s a pretty good chance they’re going to see some of these (Oxford players). This is high quality tennis. His whole team is playing at state, so maybe we’ll have another shot at them yet,” WC coach Steve Summers said.

Oxford (18-1) advanced to next week’s semifinal round against Tupelo, Madison Central or Hernando. Madison Central and Tupelo have yet to play their first-round match, and the winner still must face Hernando.

Oxford is trying to win its first Class 6A team championship after taking 10 consecutive 4A and 5A titles. The Chargers moved up to Class 6A last season and lost to Madison Central in the second round of the playoffs.

“We’ll probably play Madison in the next round, and they’ve got the best team. We beat them, but they haven’t had a full team when we’ve played them,” Nash said.

Oxford had an easy enough time in both singles matches, No. 1 boys doubles and mixed doubles to rack up the four points necessary to clinch Tuesday’s match against Warren Central. The Chargers lost a total of eight games in eight sets on those four courts.

“We were a little better. (Grafton) doesn’t miss. You’ve got to value keeping the ball in the court more in a singles match rather than spraying it around like you would in a doubles match. And our mixed is just good,” said Nash, who earlier this season won his 500th match as Oxford’s coach.

While those matches were taking place on top of the hill at Halls Ferry Park, the ones on the lower set of courts were far more competitive. Oxford won all three — in No. 2 boys doubles, No. 1 girls doubles and No. 2 girls doubles — but was pushed in the first set of each one.

No. 2 boys doubles was the most competitive match of the day, and also the last to finish. Oxford’s Ben Peeler and Edward Hu held off Warren Central’s Greyson Parman and John Jabour 7-5, 6-4.

In No. 1 girls doubles, Laney Smith and Jane Hopson put up a fight in the first set before fading in the second and losing 7-5, 6-2 to Emma Jones and Emmie Stevens.
And, in No. 2 girls doubles, Oxford’s Celie Rayburn and Catherine Bianco won 6-4, 6-1 over Madison Embry and Elaina Bailey.

“We felt like on the girls doubles courts the first sets were going to decide the match, and they did. They fell off a little bit after they lost that set,” Nash said. “I thought (Warren Central) started real well on three of the four doubles courts.”

Summers said it was a case of a talented Oxford team making the mid-match adjustments that his players struggled with.

“Seven-oh points to a dominating win on one side, but it doesn’t tell the whole story. When you play real high quality players, they make adjustments and then you have to adjust,” Summers said. “This entire time, we didn’t find ourselves attacking. We were having to adjust to them constantly. We would find something that would work, and then they would do something different and we would have to adjust. The best teams, that’s what happens. They do something dynamic and their opponents have to adjust and that was the story here.”

Summers is hopeful that those strong showings can carry over to the individual tournament in a couple of weeks — as well as to next season. The only seniors graduating from this year’s roster are Smith and Parman.

“Greyson and Laney are graduating. Everybody else is coming back. If nothing else, I want them to take away from this that we’ve seen what elite tennis is and now we know we can play with them,” Summers said. “I hope that rolls into some success for my individual events when we get to the state tournament in a couple of weeks.”