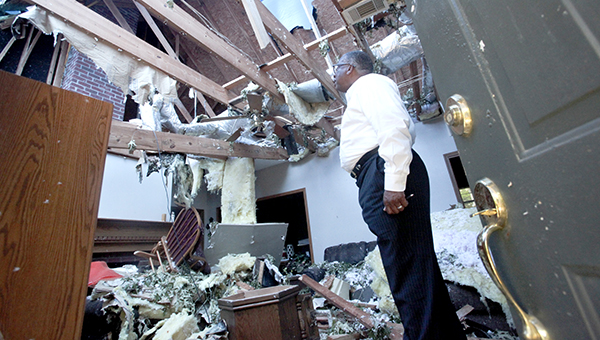 City and county crews and Entergy and Yazoo Valley Electric workers continued the job of clearing roads and restoring power in Vicksburg and Warren County in the wake of the three, FE-2 tornados that hit the area.

Warren County Emergency Management director John Elfer said as of Tuesday the tornados damaged a total of 126 homes — 76 in the city and 50 in the county — and 17 businesses. One of those was in the county. He said a Red Cross shelter opened Tuesday afternoon at First Baptist Church on Cherry Street.

Elfer said Entergy and Yazoo Valley Electric crews were working to restore power in the county. He said the cleanup was coming “slowly but surely,” adding the county had some “big time problems.”

North Ward Alderman Michael Mayfield, who is over public works, said the recovery work has been going well.

As soon as Entergy crews or one of the utility’s contract crews get the power lines out of fallen trees and back up, city crews are going in and cutting trees blocking city streets, he said.

“I think two-thirds of the streets have been opened, according to my guys in the field, so they’re going pretty good now,” Mayfield said.

Mayfield said one of the problems he is seeing is attempts by residents to cut paths through the fallen trees.

“People are beginning to take things in their own hands now, which is very, very dangerous,” he said. “They are going in there trying to pull wires out of the way. Most of those wires have been cut from the original pole, but there easily could be some that are easily alive. We just ask the people to be more patient with us.

“We’re following the Entergy crews,” he said. “Once we can get the roads and everything clear, then we can begin the cleanup.”