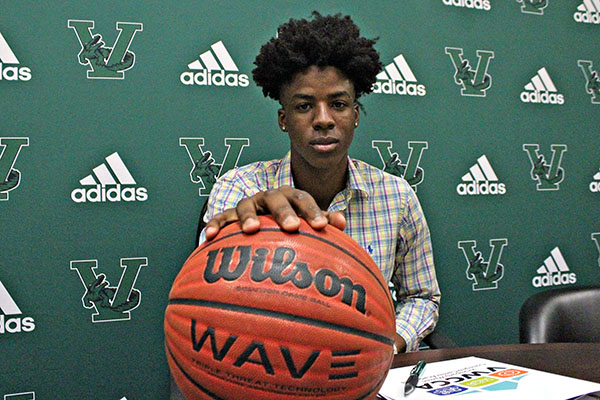 “He didn’t make my ninth-grade team. And when he came back my team was already filled and he was 6-1, 6-2 as a ninth-grader. I was sick. But I vowed to Coach (Dellie) Robinson that Ty’Ron Moore would be on our basketball team next year. And he came to work,” recalled Carter, now Vicksburg’s varsity head coach.

Moore never really stopped working. He improved his game over the next three years, developed into a solid 3-point shooter and defender, and rounded into not just a good player for the Gators but a college prospect. Moore recently fulfilled that potential by signing with Meridian Community College.

“It’s very unusual, but it just goes to show you that if you put the work in and this is what you want to do, you’ve got to give it 110 percent. He’s been doing that. I’m very proud of him and very happy for him and his family. I’m sure he’ll do well at Meridian and we may see him on a bigger stage. He’s going to be a shooter. He’s going to keep getting better,” Carter said. “They’re not giving scholarships away. You’ve got to earn it. And he’s got an opportunity to prove himself to the state of Mississippi.”

Moore also had Division I offers from Mississippi Valley State for basketball and Jackson State for baseball. Valley recently fired its coach, leading to some uncertainty with the program, and the chance to get a full basketball scholarship rather than a partial one for baseball led Moore toward Meridian. He can still sign with a four-year school in 2020 or 2021.

“Start off at juco first and be bigger. I just like their package and their team,” the soft-spoken Moore said. “It’s good. I get paid to go to school.”
Moore is a man of few words, but Carter was more than happy to be a mouthpiece for the player he watched develop into one of the best in Mississippi.

Moore became a starter last season and averaged 4.8 points and 1.7 rebounds per game. He doubled those totals this season, to 9.6 points and 3.1 rebounds while finding new ways to score. He made 36 3-pointers and shot 50 percent from long range, up from 22 3-pointers in his junior season.

“Toward the end of his junior year was when he showed he could be a really prolific shooter. Then he started showing a lot of versatility with going to the goal and everything like that,” Carter said. “Then toward the end of this season, the last six games he and Jaymeson (Norfort) kept us afloat. He started working and listening to his coaches. Everything we told him started coming to pass.”

Carter added that the improvement was the result of a lot of hard work — and a lot of extra work.

“He worked endlessly. Night in and night out. That shooting machine has taken us to plateaus we never thought we would reach,” Carter said. “That machine works miracles, and that’s what he’s been doing. If we practiced at 10, he might come in at 9 and get some shots up. He stayed an hour late. He was the guy when it came to shooting.”

Colleges took notice as well. Besides Meridian, Valley and Jackson State, a handful of other junior colleges offered scholarships. Carter said the offer from Meridian was sent in the two hours after Moore left a tryout there and the time he arrived home in Vicksburg.

Moore eventually settled on Meridian, and Carter said he thinks his player made the right choice. He’s confident Moore can get another shot at a four-year school and land in a good situation in a year or two.

“I feel like this is a good choice for him because fine-tuning his skills is what he needs to do,” Carter said. “He was a late bloomer. He didn’t start playing basketball until 10th grade and went from 5-6 to 6-3 or 6-4 right away. I think for helping his development, Meridian will be good for him. He’s willing to work.”