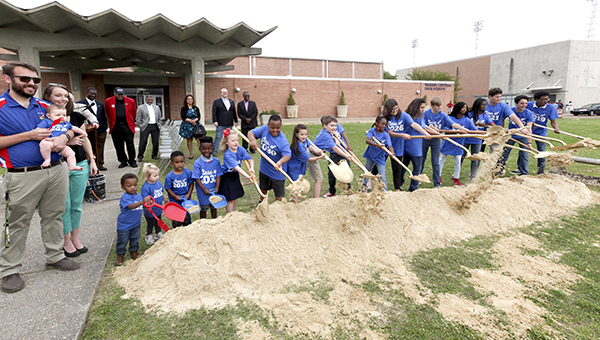 Students from the class of 2019 through 2036 toss dirt into the air signifying the groundbreaking for the additions and renovations to Warren Central High School at Warren Central Wednesday. (Courtland Wells/The Vicksburg Post)

Warren Central High School opened  its future Wednesday afternoon with a groundbreaking ceremony signaling the start of a $29.67 million remodeling and renovation project.

More than 100 people, including parents, students, school, city and county officials and members of Warren County’s legislative delegation attended the evening event in front of the school.

“This is a pretty special day for Warren Central High School,” principal Eric Green said. “This is kind of a culmination of the introduction of our career academies that we’ve had about three years at the high school. With these facilities, we’ll be able to bring them to more visible life than what we do currently with our facilities.”

Superintendent Chad Shealy said recalled a session with the Vicksburg Warren School District trustees where the plans for the district-wide school facilities restoration and remodeling project was born.

He said the vision came together when school officials went to the public for its comments and concerns for the school system’s future and to get the students college, career and life prepared.

“I want to thank the community, because they voted yes for our students’ future.”

He pointed to children and students wearing T-shirts showing their expected graduation, adding, “All these babies deserve a future that’s going to get them ready for life, and we’ve done that.”
He said school officials met with staff from project architect Dale Bailey Architects, “And we dreamed together. Our students have dreamed in this process. They sat down and worked with our architects and they came up with these solutions.

“This is a great day, I’m excited, but most of all, I’m excited for our students at Warren Central High School.”
Board of Trustees president Jim Sturgis Jr. thanked voters “for giving our children much needed improvement in our schools,” adding the school district has $75 million in construction under contract.

“It’s all about the students,” Green said after the program. “This is something the community envisioned for our children.”

He said he was looking forward to having classrooms for the school’s career academies.

Presently, he said, the school doesn’t have the room for all the academies on campus, and the students have to go to Hinds Community College Vicksburg campus.

He stood next to the pile of sand for the groundbreaking.

“We’re probably actually standing in the middle of a classroom right here,” he said.