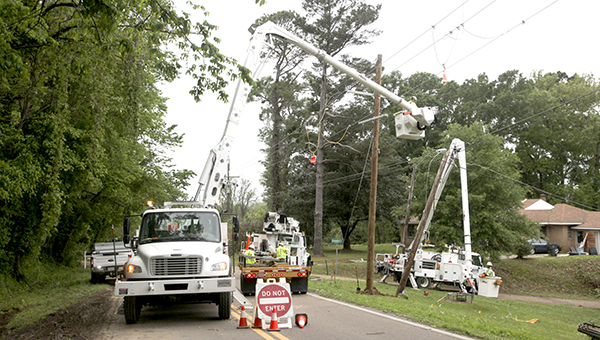 Entergy crews work to restore power along Warrenton Road Sunday afternoon. Damage caused by three, EF2 tornadoes ripping their way through Vicksburg and Warren County, knocked out power to nearly 8,000 customers in the county. As of Wednesday afternoon, the number that remained without power was less than 50. (Courtland Wells | The Vicksburg Post)

City streets are open and three county roads remained blocked as city and county work crews begin looking to start the cleanup process to complete one part of the recovery in the aftermath of three EF-2 tornados that hit the county.

“All of the streets are open,” North Ward Alderman Michael Mayfield said. “The only street that was delayed was Bazinsky (Road) which had some telephone and cable wires down, but it’s open now.

“We’ve got the trees out of the roads and we’re getting ready to start cleaning up,” he said. “I’ve got two or three crews ready to begin cleaning up; one, I believe, started late this morning; we’re going to get all the debris off the streets an the sidewalks.”

“Everything else is open,” he said.

A number of homes and businesses, he said, were damaged by the storm.

“We are at 182 houses that were in someway affected (by the storm), 21 businesses and one church, Elevate Church on Manor Drive,” Elfer said.

Of the 53 Entergy customers still without power, he said 10 of those were the result of damage from the tornado. The remainder of the outages, he said, were mostly in the flooded areas like Chickasaw and Ford Subdivision.

Shelia McKinnis, Entergy customer service representative, said some the homes still without power were in areas where the lines were on private property and the customers will have to clear the area for service crews.