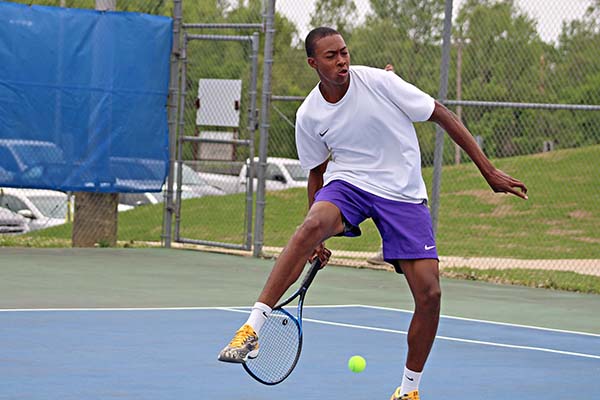 With the way it dominated its opponents in the regular season, the MAIS District 3-AAA tennis tournament certainly felt like a formality for St. Aloysius on the way to bigger and better things.

The Flashes won 30 of the 36 sets they played, and district championships at seven of the nine positions, while easily claiming the team title at the district tournament Wednesday at Halls Ferry Park.

It was the type of strong showing expected by a team that has not lost a district match in four years.

“That’s real good. I coach and train this team to play against teams like Northwest Rankin and Madison Central. I feel like if we can compete with those teams, then when we get to our district we won’t have a lot of trouble. I’d be surprised if this wasn’t happening, because we play against good competition all year long,” St. Al coach Rick Shields said. “They know if they end up playing not well here, then they get a second seed and that’s trouble because you can be gone real quick in the first round.”

All seven champions, as well as the No. 1 girls doubles team of Ashley Jarratt and Taylor Chewning, advanced to the Class AAA South State tournament on May 1 at Halls Ferry Park. The finalists at each position Wednesday advanced, and Jarratt and Chewning lost in their championship match 6-4, 7-5 to Park Place’s Reagan Savell and Maggie Savell.

St. Al’s mixed doubles team of Sterling Blanche and Ellie Blanche lost in the first round to Central Hinds’ Lexi Lomax and Ryan Tally 6-0, 6-2. Lomax and Tally lost 6-1, 6-3 to Park Place’s Macie Shelton and Walker Magee in the finals.

The rest of the tournament was a St. Al showcase.

The Flashes won all four singles titles — Chris Albert and Braxton Chewning in boys, and Elise Piazza and Natalie Jones in girls — while losing only 13 games and no sets in a combined eight matches.

The only trouble the singles players had was when Braxton Chewning won the first set of the No. 2 boys championship match 6-4 against Riverfield’s Jake Worsley. Worsley employed a slow, soft-hitting style that crossed up Chewning for a bit. He adjusted in the second set and closed out Worsley 6-4, 6-1.

“If you want to hit it hard, you have to have someone hit it hard to you,” Chewning said. “It was kind of awkward. I shouldn’t have lost those first four games. He was running a lot of lobs and forcing me to adjust my play style. After that first set I kind of figured it out.”

The boys doubles teams had to fight a little bit more for their titles.

Miles Harris and Adam Eckstein cruised through their first-round match, then had to go to a tiebreaker against Central Hinds’ Nick Lauderdale and Gabe Carr in the No. 1 finals. Harris and Eckstein blitzed the Central Hinds duo in that third set and won the match 6-2, 6-7 (5-7), 10-1.

St. Al’s other district title came in No. 2 girls doubles. Logan Young and Alli Blackburn routed Park Place’s Margaret Moss and Brooke Steen 6-0, 6-0. Young and Blackburn have not lost a match this season.

Getting so many players on to the next round was the first step for St. Al in its quest for a team state championship. In the MAIS scoring system, teams get one point for each match they win during a tournament, so the more players the Flashes can advance to the South State and State tournaments, the better their chances.

Braxton Chewning liked how things are setting up.

“This year is one of our best years, for sure. We’re pretty deep. I think we’ll have a good bit of people at State,” Chewning said.