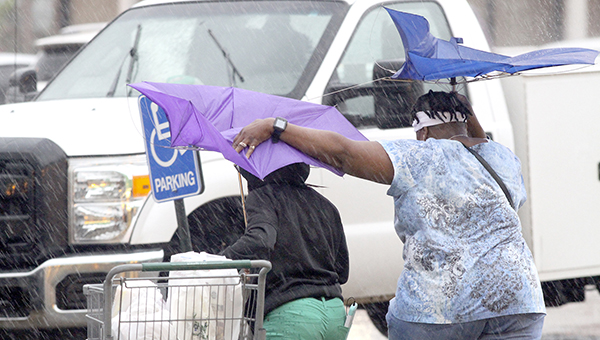 A woman uses her arm to hold down an overturned umbrella over a young girl while leaving Corner Market Thursday. Severe weather raced through the city and county, bringing heavy rains and flash flooding. (Courtland Wells/The Vicksburg Post)

The storms began moving through the area about noon. According to the National Weather Service Office in Jackson, the area received 1.9 inches of rain between noon and about 4:15 p.m., when the storms began to weaken.

Damage and downed trees were reported in the county, but the situation was nowhere near the damage that occurred April 13, when three EF-2 tornados hit the area, officials said.

“The water just went down on Sky Farm (Avenue) and it’s receding everywhere now; it was a mess for a while,” North Ward Alderman Michael Mayfield said.

He said there were few reports of downed trees in the city, and people needed to be cautious because of potential damage left from the weekend storms.

“So many of them (trees) are out there where the roots have been exposed, so we know without a doubt we’re going to have more trees to fall for that reason,” he said. “We’ve been blessed so far that not many have turned loose.”

He said people should call the city if they see trees leaning so the problem can be addressed.

The biggest problem, he said, is debris from the previous storms clogging the city’s storm drain system.

Warren County Emergency Management director John Elfer said a total of 18 trees were reported down in the county and several roads closed.

He said a tree fell on a house on Lake Boulevard causing minor damage.

While this storm was not near as intense as the April 13 storm, he said, “It was pretty severe. We came out better than Hinds County.”

Tornados were reported in Clinton, Learned, Raymond and Utica, he said.

As of 5 p.m. Thursday, 1,004 Entergy customers in Warren County were without power.

Hinds County, which was dealt a more severe blow, reported more than 13,000 customers without power.

The severe weather threat also resulted in the early dismissal of schools throughout Warren County.