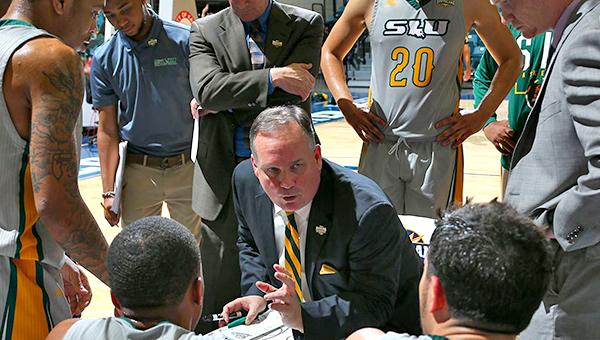 Jay Ladner talks to his team during a game with Southeastern Louisiana last season. Ladner, a Hattiesburg native, was introduced Thursday as the new men’s basketball coach at Southern Miss. (Southern Miss Athletics)

Near the end of his introductory press conference, Jay Ladner looked around the room at all of the friends, family and former teammates who had come to greet him and assured them he was in this for the long haul.

As if he needed to. Ladner is home, and very happy to be there.

Ladner was hired as Southern Miss’ next men’s basketball head coach Wednesday night and introduced to the masses on Thursday morning. The Hattiesburg native and former Southern Miss basketball star was thrilled to have a chance to lead the program he grew up watching.

“I didn’t take this job to have a foot out the door for the next one. This is home,” Ladner said. “If this doesn’t work, I have to look y’all in the face. It’s time, and we can.”

Ladner was born and raised in Hattiesburg, and was a member of Southern Miss’ 1987 NIT championship team.
After spending a few post-graduate years as a pharmaceutical sales rep — “Making a lot of money,” he joked — he embarked on a successful second career as a basketball coach.

Ladner had a 511-189 record and won the MHSAA Class 4A championship in 2011 with St. Stanislaus. He then spent one year at Oak Grove High School before he was hired at Jones County Junior College.

In 2014, he led Jones to the NJCAA national championship — the first Mississippi school to achieve that feat. His two Jones teams went 35-13.

He then moved on to Southeastern Louisiana, where his teams improved from nine wins his first year to 12, 16 and 22 victories in succeeding years. It was the school’s first 20-win season since reaching the 2005 NCAA Tournament and the third in its Division I era.

“Jay Ladner, every step of the way, won every interview. Jay checked all the boxes. He’s a Mississippi guy and has had success everywhere he’s ever been,” Southern Miss athletic director Jeremy McClain said. “In the simplest terms, Jay Ladner is a winner and I look forward to him leading our men’s basketball program for many years to come.”

Ladner replaces Doc Sadler, who resigned last week and then took a job as an assistant coach at Nebraska a couple of days later.

Sadler inherited a Southern Miss program dealing with NCAA sanctions and struggled for several years, but won 36 games the past two seasons.

“We’ve got something to work with, and it’s going to be a short amount of time before we can experience some success,” Ladner said.

Ladner quickly emerged as one of the leading candidates and was offered the job after one last round of interviews Wednesday afternoon in New Orleans.

“They grilled me pretty good. I told (wife) Jennifer that we’re going back to Hammond because there was no way I’m getting that job,” Ladner said. “We were turning on to Highway 55 and the phone rang. I didn’t know if I wanted to answer it because I was afraid it was bad news. It turned out to be good news.”

Instead of going home to Hammond, Ladner kept right on going up the interstate to his new and old home in Hattiesburg.

“This is Division I. There are only 352 of those jobs. They are very hard to come by. I’m sure Jeremy had thousands of people wanting this job. That’s why I’m so honored to have this job. I wanted THIS job,” Ladner said. “We’re primed. This is a gold mine. A black and gold mine, right here. We can do this.”