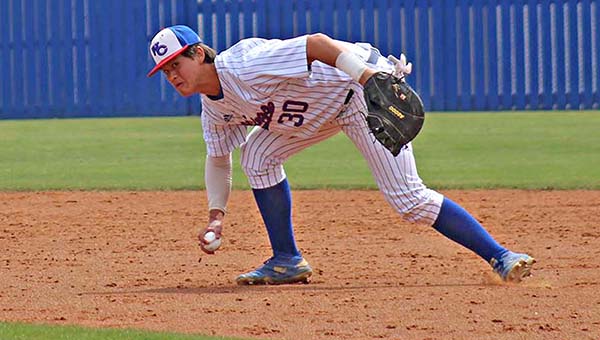 Warren Central’s Caleb Sterling picks up the baseball before throwing to first earlier this season. Sterling and the Vikings will open the Class 6A baseball playoffs Friday at 2 p.m., at home against Tupelo. (Ernest Bowker/The Vicksburg Post)

Warren Central’s path to the Class 6A baseball championship series at Trustmark Park doesn’t so much resemble a bracket as it does Thunderdome.

Four of the other five teams in the Vikings’ quadrant have 14 wins or more this season, and own a combined six state championships in the past four seasons among them. It’s the type of setup where any upsets aren’t really upsets, and almost anyone can emerge the victor at the end.

“Every year you have two or three guys that are clearly the favorites, and this year there’s probably eight or nine teams that can end up at Trustmark,” Warren Central coach Conner Douglas said. “It’s very wide open. It’s going to come down to who gets hot at the right time and catches the breaks.”

The wide-open nature of the Class 6A North bracket inspires as much hope as it does fear for those who have to go through it. Warren Central (17-9) opens the playoffs Friday with a best-of-three series against Tupelo (14-8). Both teams are potential contenders for the championship, capable of beating anyone else along the way, but only one will emerge victorious.

“We’re excited to get things going with the playoffs. The whole offseason you want to win the division and your rivalry games, but this is what you work for,” Douglas said.

Warren Central hasn’t caught a lot of breaks over the past month. A wave of injuries contributed to the team limping into the playoffs with a 2-5 record in its last seven games, after it had racked up some notable wins during the first month of the season.

Douglas said the injuries are mostly minor and the Vikings could be a team that gets stronger the longer they last in the postseason. The hard part is getting past the first round and a solid Tupelo team that also struggled down the stretch.

The Golden Wave has only won once in its last six games, and four of its five wins in the past month were against sub-.500 teams.

“We’ve had some injuries at key positions that have affected us. It’s a case of baseball being a grind,” Douglas said. “But we’re about as healthy as we can get. If we can get past this round and get some of them back, we’ll be in good shape.”

One thing in the Vikings’ favor, Douglas said, is home field advantage. Warren Central will host Game 1 of the best-of-three series at 6 p.m. Friday, and then head to Tupelo for Game 2 on Saturday. If a Game 3 is needed, it will be Monday at WC.

Both teams have taken enough long road trips this season that they’re accustomed to it, but Douglas said it is still a break in the routine that can throw players off.

“It’s going to be very beneficial for us, especially in the first round. Going from 45-minute trips to a four-hour trip is a big deal,” he said.