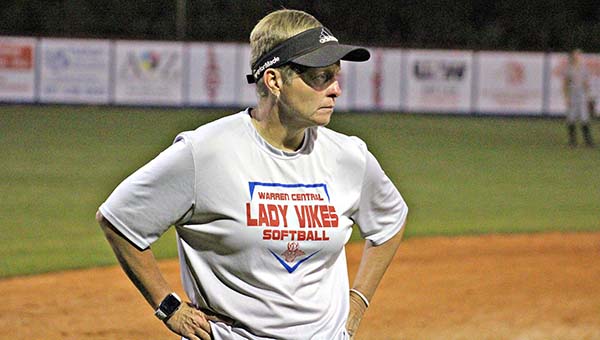 This season hasn’t been the worst of times, but it hasn’t exactly been the best of times, either, for Warren Central and Vicksburg High’s softball teams.

Neither one finished the regular season with a winning record, and they aren’t likely to get above .500 without a deep playoff run.

They’re still alive, though, which is more than some teams can say, and they can do something to salvage a down year by winning their first-round playoff series this weekend. Warren Central takes on Oxford in the Class 6A playoffs, while Vicksburg faces Saltillo in Class 5A.

The key to achieving that goal is to find the consistency that has eluded the Lady Vikes (9-14) for much of the season. They’re 3-3 over their past six games, and over the course of the season have had spells of good play and bad play — sometimes in the same game.

Tuesday’s game with Germantown, for example, was tied 3-3 through five innings. Then McKinley Graham hit a grand slam and Germantown scored nine runs in the sixth and seventh innings to win 13-3.

Graham finished 3-for-5 with a double, home run and six RBIs. Kelsey Lockridge, one of only two seniors for WC, was 2-for-3 with a homer, double, two RBIs and two runs scored on senior night.

“We need more consistency and to not give up big innings. We played well through five innings tonight. We had a few errors early and were able to come back and make plays. But then toward the end of the game we didn’t play as well as we needed to,” McGivney said. “We can’t give up nine runs in the last two innings of a ballgame and expect to win.”

Oxford (5-11) has had a similar season to the Lady Vikes. It earned the No. 3 seed from Region 2-6A, and was outscored 54-1 in four games against the top two seeds Tupelo and South Panola.

McGivney said she wasn’t yet familiar with the Chargers and planned to compile a scouting report as the week progressed. More important than what they do, she stressed, was how her team performs.

“It’s been tough. It definitely hasn’t gone the way I would have liked. I feel like a lot of games we could have won but shot ourselves in the foot and didn’t make plays or get hits when we needed to,” McGivney said. “We’re young, but that’s not an excuse at this point of the season. That time has passed. It’s time to bow up and play.”

Across town, Vicksburg High has dealt with many of the same issues. The Missy Gators (6-14) started the season on a high note, but struggled down the stretch and are limping into the Class 5A playoffs as the No. 3 seed from Region 4-5A. They did win their regular-season finale, 12-10 on Tuesday at Ridgeland, but nearly blew an 11-run lead while doing it.

“We’re much more capable than what we’ve been showing on the field. We started out the year playing pretty decent, and in our last 10 ballgames we’ve probably left eight wins on the table,” VHS coach Brian Ellis said. “It’s just been a mental thing for us this year. Our mental part of the game has affected our swinging. I really thought we would be hitting the ball much better. Through six or eight games we were hitting .300-something as a team, and that’s great. Then we just fell down. Now I think we’ve struck out 107 times this year, so we’re all or nothing.”

In keeping with that theme, Ellis is gambling a bit with the schedule for this playoff series.

With heavy rain forecast for Thursday, it would be difficult to get a field in playing shape for Friday. So the best-of-three series will begin with a doubleheader Saturday at 3 p.m. at Saltillo.

Vicksburg would host Game 3 on Monday at 5 p.m. if it’s needed, but it could be eliminated without playing at home.

Saltillo’s prom is also on Friday night, and Ellis is hoping the confluence of events will help the Missy Gators catch lightning in a bottle and maybe steal the series in one day.

“It’s going to be tough, but we don’t have anything to lose. Nobody really expects us to go up there and beat them anyway. That can be that thing that lets you find your mental side and relax. If we have several players get in a zone, then who knows?” Ellis said. “I know there’s a possibility we don’t get a home playoff game. I hate that. Our seniors have already lost their senior night. But it’s one of those things where if you get into the playoffs and get on a roll, it’s hard to shut that roll down.”