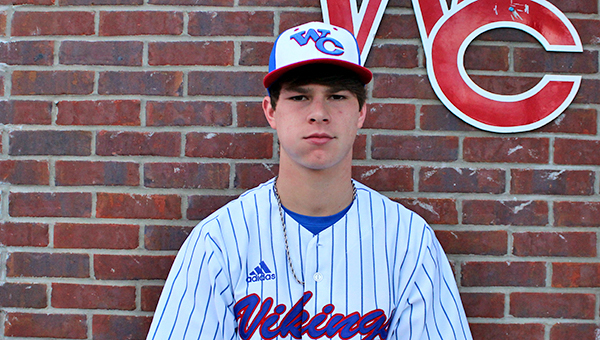 Warren Central’s Hank Holdiness hit a walk-off RBI single in the bottom of the seventh inning Friday to give the Vikings a 4-3 win over Tupelo in Game 1 of their Class 6A baseball playoff series.

Hank Holdiness hit a walk-off RBI single with two outs in the bottom of the seventh inning Friday night to give Warren Central a 4-3 win in Game 1 of its first-round MHSAA Class 6A baseball playoff series with the Golden Wave.

The Vikings (18-9) rallied from a 2-0 deficit in the fifth inning of Game 1, and again after Tupelo took the lead in the top of the seventh.

Hunter Elliott hit an RBI single in the top of the seventh inning to put Tupelo ahead again, 3-2, but Warren Central had one last rally in it.

After loading the bases with one out — on three walks, one of them intentional — Caleb Sterling hit a sacrifice fly to tie the game. Holdiness then ripped a single to left field for the game-winner.

Holdiness’ hit was only the fourth of the game for Warren Central. It only had one in the first four innings, but took advantage of eight walks by Tupelo’s pitchers. Leadoff man Wesley Ricks walked twice and scored two runs. Seven of the eight walks were issued to the Nos. 1-4 batters in the lineup.

Peyton Puckett hit two doubles for Tupelo (14-9), including one in the fifth inning that gave the Golden Wave a 2-0 lead.

Only one of Tupelo’s runs was earned, as Warren Central committed five errors. Starting pitcher Farmer Abendroth allowed two unearned runs on two hits in six innings. He struck out six and walked one.

Warren Central can close out the series and advance to the second round by winning Game 2 Saturday at 2 p.m. at Tupelo. If a Game 3 in the best-of-three series is needed, it will be back at Warren Central Monday at 2 p.m.